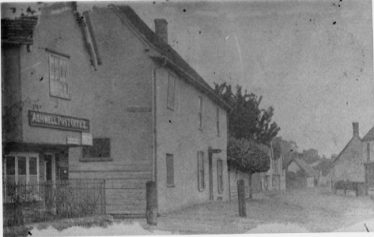 Another month where the news is dictated more by the village correspondents rather than the variety of activities going on.

The Men’s Social Club, newly formed to meet the needs of the soldiers returning from the war, met in the large hall behind the Bushel & Strike that was called the ‘Club Room’. The Literary Society had a talk on the ‘The Pilgrim Fathers’. An appropriate newsworthy subject as it would have been the 300th Anniversary of the departure of the Mayflower for the Americas.

The football reporter was in full flow with results from the team playing in the Herts Junior League. They had a mixed month losing to Hitchin Union Jacks 2-1, winning against Newnham 3-1, and drawing 0-0 with Phoenix, Letchworth.

The death was announced of Mrs Mary Susan Christy, 70, the wife of Mr Abraham Christy. She died in the ‘Post Office’ which in 1920 was in A&C Christy’s premises at Kirby Manor – where the Charity Christmas Card shop is today. An elaborate funeral was carried out at St Mary’s Church.

The Women’s Institute still expanding and now had over 100 members. At their monthly meeting they had a talk on the ‘Character training of children’ followed by a musical entertainment.