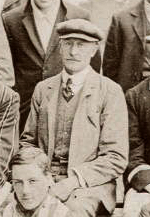 The news this month was dominated by the death of Wolverley Fordham who was a major figure in local life and politics. He was a Magistrate for Cambridgeshire, chairman of Ashwell Rural Council, member of the County Council and Guardian of the Poor. He was on the Board of all village committees and in sporting life was a member of the Cambridgeshire Hunt and the Cricket Club. His name still lives on in the Wolverley House flats in Gardiners Lane.

He was born on the 9th September 1859. In his younger years he had travelled widely.  He went big game hunting with Cecil Rhodes in Rhodesia and saw service with him in the Matabele campaign. Then he spent time on a ranch in America where he is said to have introduced schemes which improved pig and dairy production in the district. He must also have visited New Zealand where in 1877 he played one first class cricket match for Wellington. (His batting average is 14)

Back home at the Bury he settled down to brewing and married Phyllis Gribble in 1903. He died in The Grange having moved out of the Bury while it was a hospital during WW1.

Unusually for the time his body was taken to Golders Green for cremation and the ashes were returned for burial here. Albert Sheldrick describes his memory of the funeral and the surprise at seeing a casket and not a coffin:

‘I remember the funeral:  Morgan Biles, headmaster of the Merchant Taylors school lined the boys up on either side of Mill Street with strict instructions to stand with heads bowed and on no account look up as the procession passed.  Then he hurried away to play the organ for the service.  However as the cortege passed through our ranks to the solemn tolling of the church bell, I just had to take a peep.  First came four estate men carrying on their shoulders not as I expected a coffin, but a flat polished box containing the ashes, resting on two crudely cut elm branches.  This was followed closely by Ted Ashby, the groom, leading a horse and then came the mourners.’

Other commemorations followed. The Church service next Sunday had a sermon especially for him.  Miss A M Walkden recalled an incident in the brewery when, in a fire, his 2 horses neighing in great distress, refused, to leave their stable. Mr Fordham went in, calmed them down and led them quietly away through smoke and fire down the lane.

After their talk on wildflowers the Ashwell W.I. had a poem to the memory of Mr Fordham which might have been this one by local farmer Thomas Wylie.

Around the wheatfields, where the sheep-pens stood
Or, where the fathers of the people meet,
To plan and choose, with judgment wise, discreet,
How common life may move to common good.

There did we find him. Ne’er with noisy strife,
But quietly pressing on where duty lay.
And seeking every hour and every day
The fitting work, the rich abounding life.

When near at hand he heard the evening bell,
He did not flinch, but straightly went his way,
Laid down no burden, –  calmly faced the fray,
Trusting that at the end all should be well.

So let him rest!  His memory shall inspire
The living dwellers by the ancient well,
Beside the cottage fires they long shall tell
Of him, the good, true, English country Squire.

In other news some Merchant Taylors School boys were awarded medals by the RSPB for studies of trees and birds.

There were only two football results this month. Ashwell beat Norton 2-0 away and Guilden Morden 3-2 at home. The Cricket Club met sort out the appointments for the coming season.

The Choral Society had recently competed at Bedford and were now rehearsing The Merrie Men of Sherwood Forest.

120 members of the Ex-Servicemen’s Club all combined a 5s (25p) grant they had been awarded and donated the £30 to Addenbrooke’s Hospital.