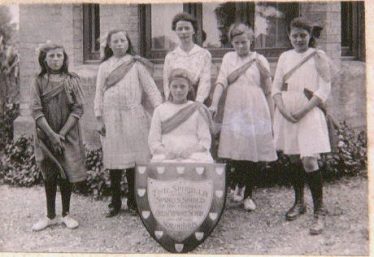 There were quite a few little matters of local concern reported this month. It must have been a dry spring that was carrying on into a hot summer. The Springs were said to be lower than ever before and when the Letchworth Town Band played sacred music on the Rec it was just too hot so few attended. Even the annual Feast was quieter than formerly. The heat could also have helped one of Messrs FJ Bailey & Co’s straw stacks to catch fire. It went out of control and was allowed to burn out.

At a Parish Council Meeting  Mr L Haylock, was appointed manager to the water works and the cemetery.

A letter from Mr Henry Morris, of Windyside, Ashwell, asked for others interested to contact him about appealing for an earlier school train to Cambridge.

St Mary’s and the Wesleyan Church Sunday Schools both had their annual treats.

Pembroke College, Cambridge advertised the sale by private treaty of Maltings Farm, Ashwell, containing about 67 acres of arable land with small house, farm buildings and a pair of cottages. At present we are unsure of where this is but it might be where we now call Pembroke Farm on the Slip End Road.

A whole catalogue of accidents makes us consider that modern ‘Health and Safety’ may after all have some benefits. Mr Flack, who broke his thigh and had other serious injuries caused by an accident with Messrs Fordham’s motor trailer was progressing well at Addenbrooke’s Hospital. As were Mr Arthur Harradine, who broke a leg above the ankle whilst in employ of Mr William Cooper, Mr Skerman, employed by FJ Bailey & Co, the builders had a broken nose. Mr William Searle had a broken collar bone from a cycling accident whilst acting as temporary postman.

At sport the Lawn Tennis club and the cricket teams were very busy with a mixed bag of results. The Football Club was already preparing for the next season by announcing that they planned to field two teams.

However the biggest success of the month must go to the Girls of the Ashwell County School who competed at the District Sports and took home the Spirella Sports Challenge Shield. Our picture shows the wining girls with their teacher, Miss Hyslop.

The other big event of the month, which presumably revelled in the hot weather, was the Garden Fete organised by the WI and held in the Bury Grounds. There was a medieval theme for the stalls and games, a cricket match and the Choral Society performed ‘The Merrie Men of Sherwood Forest’. All this was followed in the evening by dancing.   Over 1,000 attended and £115 was taken with the proceeds going towards a Village Hall. If this was not enough for the WI 75 members went off for their summer outing to Bedford in 3 motor lorries.