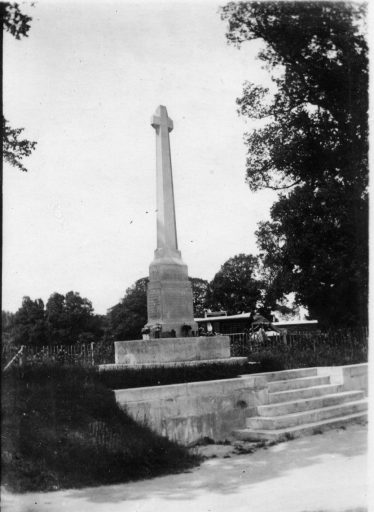 The massive sum of £600 had been raised to build the War Memorial. After much discussion the site on the corner of the Recreation Ground where it was eventually built was decided upon. Other sites were considered, for example in the cemetery, but it was felt that the position at the road junction would be, as it certainly is, a constant reminder.

New Year’s Eve was celebrated with a supper for the members of the Cricketers Pub Slate Club and a dance was held at the Bury for the ‘dancing class’. A social group previously unknown to me.

The only football result this month was against Newnham which Ashwell won 6-1.

There was a long list of deaths but interestingly and even if you include the previous months as well the youngest was 69.

On Friday 14th January the oldest inhabitant, at the time 94, Mr Thomas Leete died in Back Street. He had been a farm manager to several farmers the last of which was Mr Smyth of Cold Harbour.

Mrs Eliza Paterson, 69, daughter of Mary Robinson, died after suffering cancer for 6 years. She had lived for her last 6 months with her cousin Mr F Gentle at Station Road. Mr William Wallis died at the age of 76 near the Post Office but I have no further details.

Finally, Mrs Alfred Winter died on 17th January at 86. She had lived in the same house in West End for 81 years. She was assistant school mistress to Miss Radcliffe for many years until she married and was buried at the Baptist Church Burial Ground.

The Women’s Institute held their Annual meeting, including a talk on home nursing, at the Merchant Taylors School.

Another meeting was held with a much less parochial theme when Lord Robert Cecil, an Independent Conservative came and gave a talk of his part in setting up the League of Nations.