The main story of the month, about of a child’s accidental fatal fall from a window, was a striking tale of how a seemingly small accident can turn into a tragedy. The 13 month old Florence Lily May Sargent of Swan Street was being undressed on a table by an open window by the maid, Sylvia Whitby, who was herself only 14. A car passed by the window, which one supposes was quite an event in those days. The baby leant out to see it and made a grab for the curtain but the curtain rail gave way and the child fell out of the window into road. She died later that night from the injuries she received. I cannot find further details of the Sargent family but many older readers will remember Sylvia who married Fred Moule. She was the sister of Clive, another well remembered village character, and they lived at Cliff House, Kingsland Way.

Miss Maud Adkins died, after a long period of failing health, in her home at the age of 45. The internment was at the Congregational Church Yard. She was the daughter of George and Elizabeth Adkins and sister to Fanny who ran the fascinating shop on the corner of High Street and Church Lane where the dentist is today. Maud was a dressmaker and helped in the shop. She may be one of the girls in the window of the photograph.

Two Ashwell weddings took place in the month. At the Congregational Church Mr William J Moule married Miss Elsie Mole. Although married in Ashwell the couple seem to have spent most of their lives elsewhere.  At St Margaret’s, Bygrave Mr Albert Bullard married Miss Hilda Wilkins of Ashwell. As both were from Ashwell, I am not sure why they married in Bygrave. The bridegroom was a former P.O.W. in Germany for most of the War.

In sport the Lawn Tennis Club held an ‘American tournament’. The cricket team lost to Three Counties Mental Hospital and Kneesworth Street but beat Biggleswade, Stotfold and Stevenage. A trial was held on Rec to determine the teams for the forthcoming football season.

In other news the Wesleyan church celebrated their anniversary and held a Bazaar that raised £28.75. The Egbert Independent Friendly Society were selling a pair of brick and slate cottages with and allotment of arable land. The War Memorial committee were considering estimates for the paving and setting around the monument. And of course the W.I. had their monthly lecture, this time on the ‘History of Meldreth Church’. 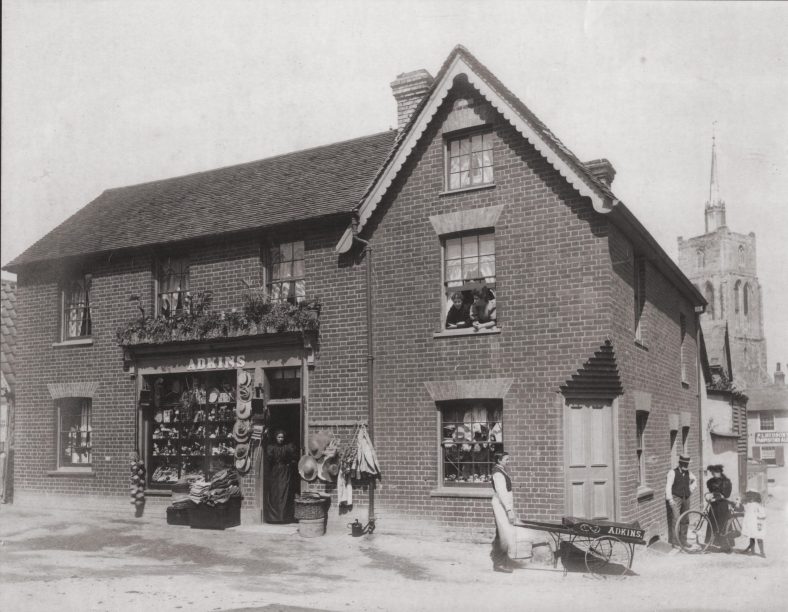 zoom
Adkins Shop, High Street
Maud is one of the girls in the window