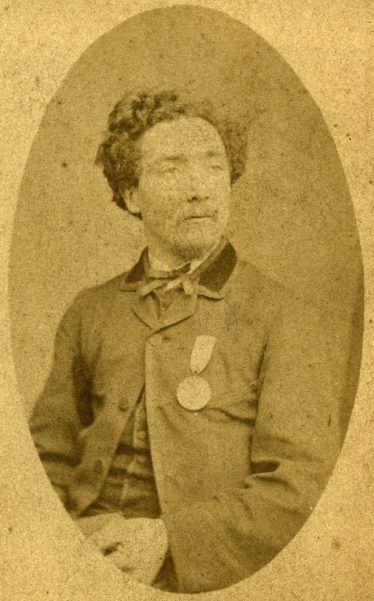 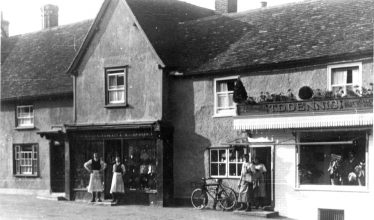 zoom
Christys Shop in the 1920s 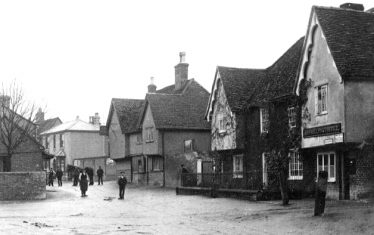 At the Bushel & Strike by order of Mrs J G Clarke there was a sale of household furniture and caterer’s effects. Mrs Clarke was surrendering the licence after over 37 years as landlord with her husband who died in March 1920.

John Hart Christy died, aged 82, at his residence ‘opposite the Post Office’. At this time the Post Office was in Kirby Manor. He was a well-respected member of the community who with his brother, Abraham, ran a coal, mineral water, grocery and drapery business, that had started across the road in the Village Stores but had expanded when the other businesses were developed. In his later years he had been in partnership with his son, Mr H Christy, running the drapery and grocery trades.

John Reynolds, another octogenarian of Ashwell, died in Pickings Lane but I have no other information about him. Pickings Lane is now called Alms Lane.

The winter season of evening entertainments was getting underway. At the Merchant Taylors School the Ashwell Choral Society held its AGM and arranged their future programme and the first in a series of lectures was given by the Rector of Fowlmere called ‘Our bit of Cambridgeshire, No.1’. He asked the question: Was Ashwell Street the oldest road in England? But what was the answer.

In sport the Football Club had a disappointing month, although they started well by beating Baldock Scouts in Mr John Sale’s meadow. They were then beaten by Baldock in the League, the Junior Cup and the Letchworth Hospital Cup.
The Cricket Club rounded off the season with a table showing all last season’s results. Another season starting up and which was then very much part of Ashwell life was hunting. The Cambridgeshire Hounds met for Cub Hunting and made a kill at Odsey.

At Ashwell Station the staff found two trucks of straw ablaze. They soon detached nearby vulnerable trucks and threw out the burning straw. The Royston Fire Brigade and steamer came in time to deal with any danger from the heaped burning straw.

Joseph Waldock, who had served 4 years in the Navy, was chosen as one of 200 from over 900 applicants to man HMS Renown on the Prince of Wales Indian tour.
Mr William Cooper was gazetted as a magistrate. He was already a prominent County Councillor and held many other posts including church warden. The wedding took place at St Mary’s Church between Mr Louis Edward Courts of Holbeach, Lincs and Miss Hilda Mabel, youngest daughter of Mr & Mrs Ellis Anderson, a churchwarden.

The organ at the Congregational Church was returning to a re-dedication service in Ashwell after being rebuilt at Cambridge by Miller & Son. St Mary’s was the last of the places of worship to hold its Harvest Festival.

The War Memorial was erected and prepared ready for dedication. The 22ft high design by Sir Edwin Lutyens had been constructed by Messrs Holland, Hannan, Cubitt & Co masons of Greys Inn Rd, London.

There was an interesting story entitled ‘Smallholder’s Enterprise’ Mr J Dellar had been given notice to quit his Elbrooke homestead so decided to build a house on his own land off the Hinxworth Road unhampered by any planning laws. Assisted by an ex-serviceman he built 4-room single storey dwelling and with another man sunk a well, all in good time. The house was now occupied.

And finally at the Women’s Institute meeting over 50 members were present to see a demonstration of emptying, cleaning, and re-filling hair or wool mattress.