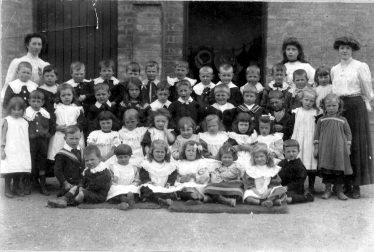 zoom
Ashwell Board Schools Infant Group 1910 to 1920
Who are the teachers? 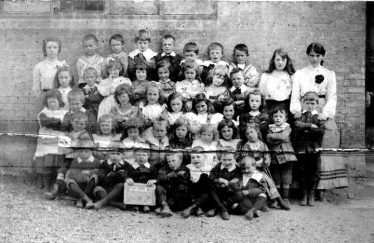 March 1920 was another month filled with the to and fro of village life. I think the Crow had a football reporter and a WI reporter who supplied most of their news.

Outside these areas there are only a few things mentioned. The Ex-servicemen’s dinner was planned for Easter Monday.         There was a meeting at the Merchant Taylors School to form a Tennis Club, when Mrs Fordham generously offered The Bury court to play on.

On the 10th Miss H Bryant, who was an ardent worker for the Wesleyan Chapel, and a teacher at the Council School, went to the Congo to carry out missionary work. Hattie Bryant was a teacher at the Primary School from at least 1915 and although ‘Uncertified’ she was responsible for all the duties expected of a teacher. On the 31st October 1919 she left the school and was presented with a pendant subscribed for by the children and teachers. She had lived with her parents in Vine Cottage, High Street and after at The Elms, Lucas Lane. Her sister Lily May followed her into teaching for a long period at Odsey School. After this report we have no further records of Hattie.

A concert, which may have been connected to this event was held in the Wesleyan School producing £7.35p.

In the following match the Seniors played Welwyn and won 3-1. This time the collection for the home club raised £1.

At the Women’s Institute meeting Miss Walkden gave a talk on making a blouse. The entertainment was several recitations and this month’s members prize went to Miss Irene Worboys for something that is very alien to todays sensibilities -  the best golliwog.