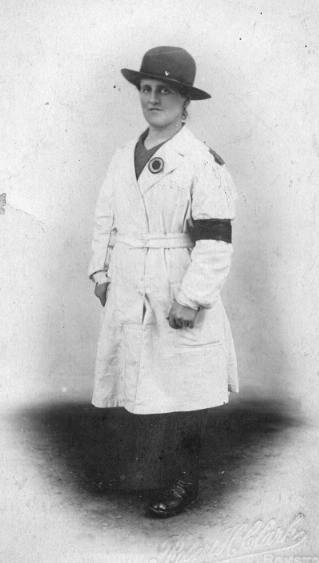 The process of commissioning a War memorial was well underway and one of the most important considerations was who would be included. In order to check for mistakes or omissions a list of names to be inscribed was posted up at the Post Office. As we have found from our recent researches into the WW1 Roll of Honour this is not such a cut and dry task as it might seem. Eligibility depended on many different factors of relationship and residence.

During the month there was the usual round of regular events. Organisations closely associated with Mrs Fordham made use of the Bury gardens. The Guides held a Jumble sale that made £10-11s-0½d. The Women’s Institute meeting was interrupted by a violent storm and only continued after they had all rushed indoors to hear a lecture on the local Parish Church by an archaeologist. June 1920 was obviously a hot and stormy month as another thunderstorm caused serious damage to a house occupied by Mrs J Covington.

The Congregational Church held Anniversary Services and a special Children’s Tea for the Sunday School with Games. Other village entertainment was provided by a concert with the ‘Merry Macks’ at the schoolroom. The only sporting event reported was a Cricket match in which the 2nd XI beat a Morden team.

A special celebration commemorated the 50 years service that Mr John G Bonfield had given to Ashwell as a coachman. He had driven passengers to and from the station on average three times a day which over the years has come to the amazing total of 237,750 miles

The death was announced of Esther Waldock at the age of 47. Mrs Waldock died after suffering from a long illness, near the ‘Cricketters Inn’ (Lucas Lane) She had been a former employee of Mr Charles S Walkden, the horticulturalist and writer.

On a happier note there was a wedding between Mr William Rawlins Warboys of Ashwell and Miss Alice Mary Butt at the Wesleyan Church (which used to be on the High Street) Miss Butt was in the Land Army during the war and the museum is fortunate to have a picture of her in her uniform. Mr Warboys nickname was Rolly and the couple moved into Chain Cottage on the corner of Gardiners Lane and what is now called Rolly’s Lane after him.