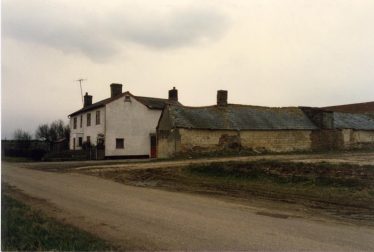 Only 4 Ashwell events are mentioned in the Royston Crow for this month.

An Advertisement for the sale of 32 acres 2 roods and 7 perches of freehold arable land adjoining the east of the High Road from Ashwell to Dunton was placed in the paper by the Ashwell Non-Ecclesiastical Charities, who were the owners. Most of this land in the very north of the Ashwell had been bequeathed to the parish by generous donors. The various parcels of land were let out and the profits used to benefit the poor by the distribution of bread, coal, yards of flannel and the support of apprenticeships. Albert Sheldrick says that ‘Towards the end of the 19th century, after many bad harvests and poor corn prices, the tenant farmers either refused or simply could not pay the rents. Consequently the church officials decided to sell the land and invest the money so the charity could continue its good works, using the interest on these investments’ The land advertised, known as Mobbs Hole, had been let for a period of 7 years to Mr J L Parrish but this was due to expire in 1920. The annual rental was £32.50. In early July it was bought by Mr G Murfitt for £600.

The Ashwell Congregational Church (now the URC) Sunday School celebrated its anniversary with what were called the ‘usual services and party’.

A Dramatic Entertainment was performed in the Merchant Taylors School over two evenings by the lads who have attended evening classes which were held at the school and the Technical Rooms (now the Parish Rooms near the museum). £11.52 was raised which went to defray some of the evening class expenses and also towards the newly reformed cricket club.

At a ‘Garden meeting’ the speaker engaged came from the St Dunstan’s charity. He described the work done with blinded service men and was given a collection of £10.32.
St Dunstan’s has now changed its name to Blind Veterans UK and  is a large British charity, providing free support and services to vision-impaired ex-Armed Forces and National Service personnel. The charity has recently unveiled a statue outside Manchester Piccadilly station by Johanna Domke-Guyot entitled Victory Over Blindness, which depicts seven blinded First World War soldiers leading one another away from the battlefield with their hands on the shoulders of the man in front.