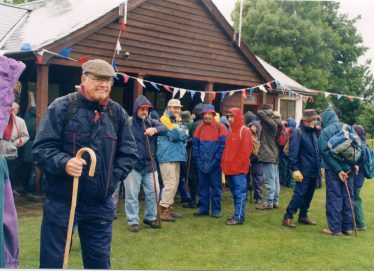 zoom
Beating of the Bounds 2000
The start in the rain 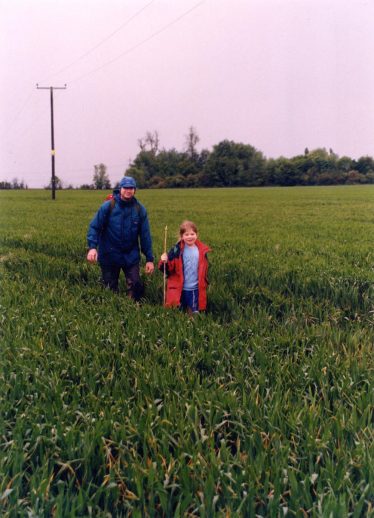 zoom
Marking out the boundary through a field

The community was still coming together to deal with the aftereffects of the war with continuing support for the returning soldiers.  A successful Smoking Concert was produced for the veterans but there was also a view to maintain a focus for these events in the long term by the setting up of a Men’s Club. The idea was obviously very popular as no sooner had a meeting been called to discuss its formation than committee had been appointed and a room hired. By the end of the month there were over 60 members and a programme of Whist drives and draughts tournaments was up and running.

There was a good array of local news of the sort that filled lots of newspapers at the time.

Mr G Mowberry, 70, in the employ of Mr W Auburn, a horse slaughterer of Ickleford, was driving a cart in Ashwell when one rein broke and in attempting to turn the corner into Gardiners Lane the cart overturned and the driver was thrown out. He suffered a compound fracture to his upper right arm and injury to the left side of his head. After first aid treatment by PC Pitcher and Nurse Reading he was taken to hospital.

The football teams had a busy fixture list with mixed results. In a home game they beat Letchworth 5-1 but playing at Baldock they lost 2-1. Meanwhile the Juniors played St Ippolyts and lost 13-0.

There was a Meet of the hounds of the Cambridgeshire Hunt at The Synkes which finished with the capture of two foxes. The Synkes is the area near the parish and county boundary along Station Road. Cinque Cottages stand there now.

However the hunt was not entirely successful in controlling the fox population. Under the headline: ‘Reynard in Fowl House’ it was reported that Mr Wylie had lost 11 fowls although 7 had been found buried nearby. I think at this time Mr Wylie lived at the Cuckoo on the Hinxworth Road.

Two deaths were reported this month. Albert Edwin (Bert) Pickett, 41, of Ashwell had joined up in 1915 and served 2 ½ years but had contracted a recurring illness. He died while visiting his brother at Loughborough.

The whole village was shocked by the sudden death, on the 19th October, of Sybil Audrey Haylock the 15-year-old daughter of Mr & Mrs Bernard Haylock from West End. She was working as a pupil teacher at the Merchant Taylors School and had been ill for only a few days before dying in hospital. The church was full for her funeral with the boys from the school providing the choir. At the Women’s Institute meeting sympathy was expressed by all on death of one of its members, Miss Sybil Haylock.

The boys from the Merchant Taylors School were also busy on the last Tuesday in the month with the recreation of an ancient custom: The Beating of the Bounds. They were joined by many adults and ‘for most of the way’ by the girls from the County School. Albert Sheldrick fully describes the day or a 1921 repeat of it in his book ‘A Different World’ Mr Bowman, armed with a huge map, briefed the boys and girls on the size of the parish, the walk was to be over 12 miles,  and the duties to be performed at boundary posts where the younger boys were bumped three times so that they would forever remember the parish boundaries.  Once upon a time it was an annual perambulation, but Mr Bowman thought this was the first time it had been done since 1635! Lately it has been done sporadically the last time I remember was a very rainy day in 2000 to celebrate the millennium.

Charles Walkden as ever was ahead of his time. He wrote a letter to the paper looking at the broader political picture conjured up by the governments post-war reconstruction plans. It decried the vanishing woodland, fens and wildlife and wondered what life would be like for future generations…….