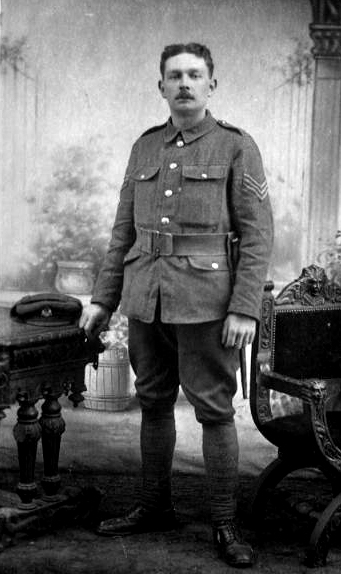 The news from the front was very depressing even at this late stage of the war.

A stark headline says ‘Mr & Mrs Dodson of Ashwell lose another son’ then the report goes on to say Mr & Mrs Dodson of Cold Harbour have heard their son Private Alfred J C Dodson, aged only 19, was killed in an ambush on the 10th August.  He was buried at Vielle-Chapelle in France and is commemorated on the Guilden Morden Memorial. If his residence was Cold Harbour, although close to Ashwell, it is in fact in Guilden Morden parish then this memorial is fitting, however some records say that he was living in Caldecote.
One of his four brothers Private Ferdinand Dodson died of wounds 28th September 1915. He is also commemorated on the Guilden Morden Memorial

There was news of the death of Private Percy Bullimore. He was the eldest son of Mr & Mrs William Bullimore who at the time were living in Kingsland Terrace. The family had moved to the country from Holloway because of the effects of air raids on his father’s health. Percy was killed in action on 23rd August just 2 months short of his 19th birthday. He is commemorated on the Ashwell Memorial. Before enlisting he had distinguished himself at school, won a scholarship to Clark’s College then entered the Civil Service and would have had a substantial career ahead of him if not for the war.

The third casualty of the month was Lieutenant Harvey Bryant (Sometimes the surname is spelt Briant). Mr & Mrs Wilfred Bryant of Vine Villa and later The Elms heard that their only son 2nd Lieutenant Harvey Bryant, 28, was killed in action on 12th September. He had served in France, Egypt and Palestine, then France again. Letters from his CO and a fellow officer commended his bravery and he was awarded the Military Cross for gallantry in action on the 26th August. He is buried in France and commemorated on the Ashwell Memorial.

During August Private Albert P Wilkins of Kingsland Terrace was wounded in the back and as he lay injured was buried by a shell exploding nearby. He was rescued and evacuated to England. He soon recovered and was ready to go back to France. He survived the war and died in 1976.

Mr N D Angell was retiring from farming and had commissioned the local auctioneers, Messrs George Jackson & Son to sell all his equipment. There were 12 horses, various agricultural implements and carts but also a quantity of ‘steam tackle’ including a Garrat’s 8hp portable engine, a Marshalls 5ft drum thresher, a Maynards 5-knife chaffcutter, a Stanfords Clover puller along with many extras including an elevator.

At the Congregational Church (now the URC) the Harvest service was conducted by a visiting American preacher.

The recent Garden Fete, reported last month, generated gross takings of £258-17s-11d that were forwarded to the Red Cross who promptly sent a letter of thanks.

At the Royston Petty Sessions it sounds as if a small neighbourly confrontation became uncontrollable. Lillian Arthur, 38, of Ashwell was summoned by Alice Skerman for assault on 11th September. Alice had told Mr Arthur that his wife owed her and others money. This had caused trouble leading to a fight and being hit in her face. The defendant pleaded guilty but was fined 10s (50p) for assault.

The Ashwell Parish Council met quarterly at this time and at the latest meeting all the councillors were present. There were two main items on the agenda. A letter was received from Guilden Morden Council asking the councillors to protest to Herts CC over the condition of the footbridge from Mobb’s Hole to Guilden Morden. This is a route that is not often used now – I wonder if there is even a bridge there today. The conveyance and payment for the Burial Ground (the present Cemetery) was completed and Mr W A Bray was appointed clerk to the new Ashwell Burial Authority.