zoom
the roll of Honour from the Ashwell Merchant Taylors School 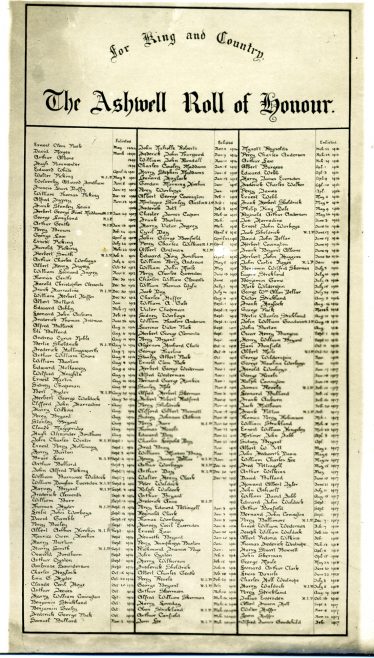 The Royston Crow has very little to tell us this month.

The only report we have a record of is that the Parish Council had a meeting when ‘business of a routine nature’ was carried out. This does not help when trying to write a column about 100 Years Ago. However from other sources I have gleaned the following.

The Merchant Taylors School was shut for the Harvest Vacation from 10th August until the 1st October. The headmaster writes: “During the holidays several occasional visits of the Old Boys from the Western Font have been paid to the old School and many had been the thrilling episodes they have related. They have taken much interest in inspecting the framed photographs of the Boys fighting for their King and Country which I have had much pleasure in presenting to the School as permanent records of the noble sacrifice the pupils have made in the cause of Freedom and Humanity.” He goes on to say: “As far as is known the Roll of Honour of those who have made the Supreme Sacrifice is now 30” – and there was still another year of the war to go.

The Roll of Honour and photographs, which were later put into an album and passed on to the museum have formed the basis for our researches. The details of all those who served in the War are gradually being loaded onto the museum website. Many hours of work have been put into discovering these facts and although there is much detail there must be many more family stories and pictures that can fill out the lives of those involved. Please look at https://www.ashwellmuseum.org.uk/category/roll_of_honour_-ww1 and see if you can add anything.

Other activities by the boys during the school vacation involved digging the school garden which produced several bushels of potatoes. Apples and other fruit were gathered to keep for the winter.

In the first week of the school term a boy was admitted who is termed a ‘Refugee’ His parents, along with many others, had been so alarmed by the Air Raids in London that they were ‘scared into the country’.