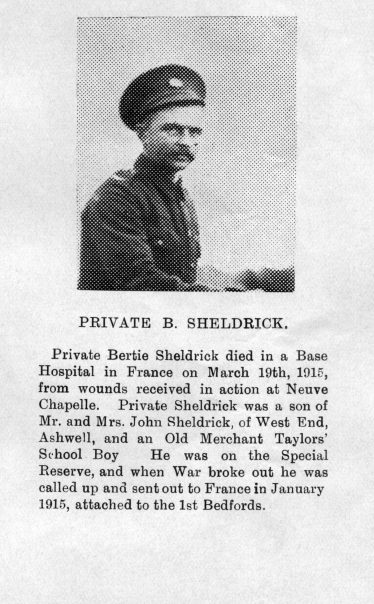 A picture of Private Bertie Sheldrick along with a short biographical note was published this month. I think this was part of a series call ‘Local Patriots’ which were sent in by relatives for publication. Later they were gathered together into small booklets. He died on the 19th March 1915 and news of his death was reported then – see the April 2015 Village News. He received gunshot wounds in the legs at the battle of Neuve Chapelle and died at Base Hospital.

The paper found it worthy of note that the ‘Signal Men’, i.e. a small specialist company attached to a battalion probably in training and now billeted in the village, attended Church Parade. They must have made a grand display when most young men in the village were already away at the war.

The Herts County Council proposal to transfer the boys from the Merchant Taylors School to the County School, which is now the Junior School, was met with surprise and indignation. This was obviously another case of authority thinking they knew better than Ashwell. A parish meeting was called to sort things out.

The Ashwell Nursing Association held their 18th AGM.  The funds were in a slight deficit however as Nurse Reading’s work was deemed satisfactory her salary was raised to £54 per annum. The nursing association was a prime example of the community joining together to provide a health and care service for all. I am not sure if this was typical. Was Ashwell ahead of its time? We now have many of the records from the association in the museum if anyone wants to delve deeper into its history.

In the Quarterly meeting of the Parish Council only one matter was reported. As the boundary between the Recreation Ground and the property of the Ashwell Benefit Society had finally been decided, then the fencing could now be authorised.