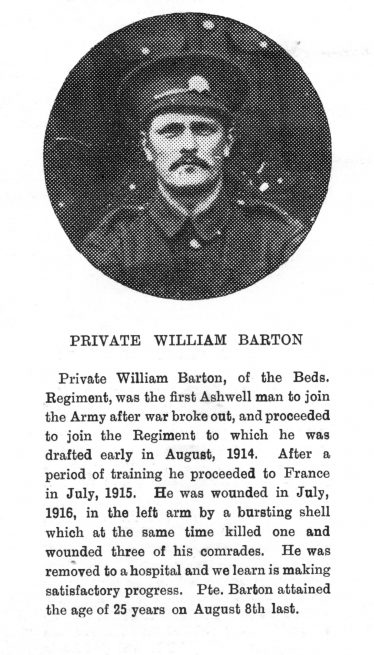 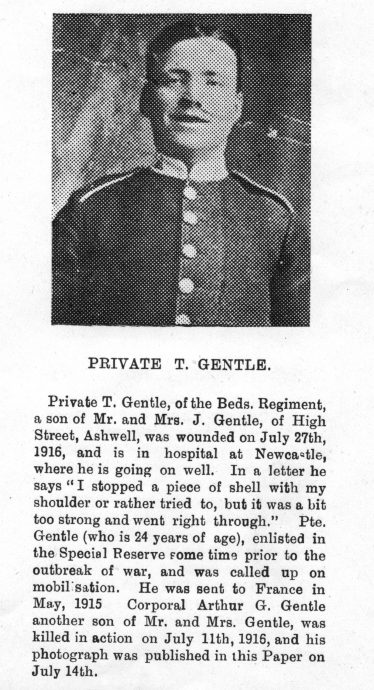 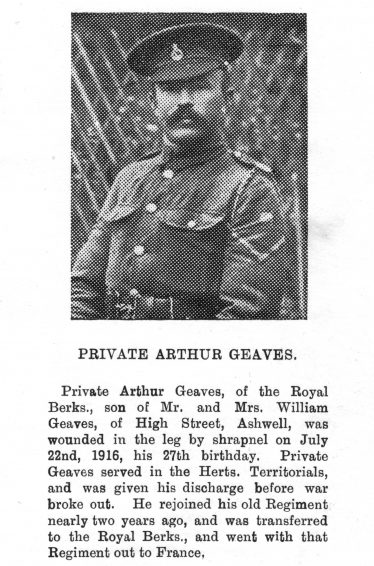 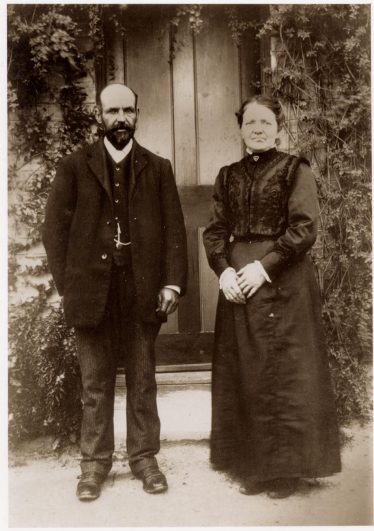 zoom
Charles and Louisa Worboys
Parents of Arthur and Percy

The new Soldiers convalescent hospital in the Bury was being well supported by the neighbourhood. There was a second list of the donations that included four money gifts, fruit, vegetables, cakes, cigarettes, sausages, and eggs.

Redlands Farm House was advertised as available to let by Sir George Fordham of Odsey. It was situated ‘1 mile from Ashwell and the station’ and offered 5 rooms downstairs, 6 upstairs, a bathroom and 2 WCs. It is possible that this was the accommodation rented for a short time by the parents of Alexander Anns who was killed in the war and is commemorated on the Ashwell war memorial.

St Marys and the non-conformist churches came together in a combined service dedicated to the second anniversary of the declaration of war.

There were several stories of soldiers who had been wounded. Most of them carry more than the bald facts and some are repeat notices with more details and perhaps a photograph.

Lance-Corporal Arthur Worboys, son of Mr and Mrs C Worboys, Silver Street, was wounded for the third time on this occasion by a machine gun bullet through calf.  I think Arthur was the brother of Percy who had enlisted in Australia and was wounded and captured in Turkey. Their parents were Charles and Louisa.

Private Thomas Gentle, the son of Mr and Mrs J. Gentle, High St, Ashwell, was wounded on 16th July, 1916 and was doing well in hospital in Newcastle. In a letter he says “I stopped a piece of shell with my shoulder or rather tried to, but it was a bit too strong and went right through.”  His brother Arthur G. Gentle was killed in action on 11th July, 1916.

Private William Randall, son of Mr & Mrs Fred Randall, Ashwell Station, lost his left arm. A letter describes his part in an advance at the front with the enemy potting at three British planes with over 100 shells but no success.

Private William Barton, 25, received a shell wound in his left arm but was now recovering. The same shell killed one and wounded three more of his comrades. He was the first Ashwell man to join the army.

Private Arthur Geaves, 27, son of Mr & Mrs William Geaves, High Street, Ashwell, wounded in the leg by shrapnel. According to the report this was on 22nd July, 1916 his 27th birthday. More details and a photograph are in the 1916 July article in this series.

Away from the war an event of likely interest to Ashwellians was the marriage in Royston of Rev Stanley Wilson, son of the late Mr Wilson & Mrs Wilson, The Poplars, Ashwell to Edith Daintry.  Rev Wilson was now Assistant Curate at Colchester.

Mr Edward Snow Fordham, the London magistrate who lived in Elbrooke House, was again in the news for his outspoken comments. Under the headline ‘The Ubiquitous Gramaphone’ we are told that a woman had made a strong complaint to a London police court. Her neighbour, a man, had smashed 4 of her windows because she had been playing her gramophone after 10 pm in hot weather.  Mr Fordham’s response lacked any sympathy for the woman as he said “the gramophone is a most tiring, vexing and troublesome noise and she deserves to have 20 windows smashed.”  However a policeman was sent to call on the neighbour to make him pay for damage.