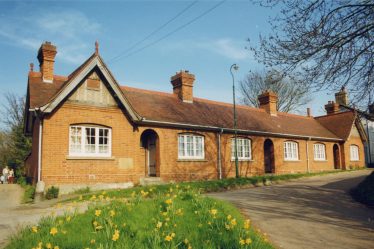 September 1915 was again a month very short of reported news with absolutely nothing about the war. The Royston Crow kept to its round of the few events that were carrying on as usual and the school was still closed for the harvest holiday so there was nothing to mention there.

One of the Moss Cottage Homes had become empty due to death and a meeting was held to decide on a new tenant. Later in the month it was announced that it would be Mrs F E Bryant.

At Ashwell End House, now ’Beresfords’,  a daughter was born to Mrs Hine.  She was the wife of Reginald L Hine the famous local historian. Mr Hine was born in Newnham but spent his early married life in Ashwell. Amongst his recreations was playing cricket for Ashwell and I think always held a soft spot for the museum judging from the number of books he personally donated.

Ralph Bailey, son of Mr & Mrs F J Bailey, was married in Glasgow to Hilda Davis of Halifax. Mrs and Mrs F J Bailey lived in Delve House, Ashwell however I am not sure exactly where this was. Frederick Bailey was a builder who won the contract to build the school and from then on his firm did most of the building work in Ashwell. When his eldest son, John, took over running the business his father retired to the large house at the top of Bear Lane – at present still J Cooke Engineering.

Ralph Bailey, the third son, obviously spread his wings carving out a career for himself in Glasgow.  It says he was a great sportsman at both team games and track events and he had just completed a 100 mile motorcycle reliability trial near Glasgow. He was employed as an electrical engineer and worked  at testing electrical equipment for HM Ships.