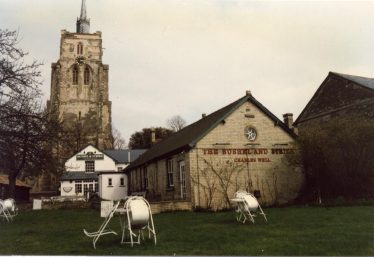 May 1914 was a seemingly quiet month in Ashwell. The cricket season had started but for some reason the match with Clare College was scratched however a home game was played against Baldock.  On one Sunday the Bury gardens were open to the public.

The Snowdrop Minstrels had an end of season supper for 40 at the ‘Gardener’s Lane, Assembly Rooms’. After the supper they were joined by a crowd for the entertainment. Some £26 had been raised for charity by the Minstrels during the past season.

This was the hall which is now the restaurant of the Bushel and Strike. It was built in the latter half of the nineteenth century when working men’s sick benefit clubs became popular. They were much encouraged by the parish authorities but I am not sure who actually funded the construction. Over the years it has been used by many of these clubs including the Foresters, the Oddfellows, and the Buffs. After the formation of the British Legion it was used for their meetings. When John Clark was both landlord and church clerk the winter Sunday school treats were held there. During the Second World War it become known as St George’s Hall and was used as a schoolroom and canteen for evacuee children.

In May 1914 the Thursday Club Friendly Society used the hall for the reason it was built. They had their 98th AGM along with Supper which had to be spread over two evenings to accommodate the numbers.

There was another major fire this month. This time two stacks of clover hay at Cold Harbour Farm were burned. The farm was formerly the property of Mr Smyth but had lately been sold to Mr Smoothly of Baldock

There were three reported deaths. Doris May Pickett was only 2 years old. Mrs Jane Pack was 73 and she had spent 50 Christmases in the same house. Two of her sisters had also died recently and she leaves 3 sons and 2 daughters. Mr Samuel Thorne was a farmer and builder from an old Ashwell family however he left the village about 39 years ago (in 1875). During his life he worked as apprentice to Messrs Jacklin & Co, builders and then with Messrs Brand & Co Ltd of Mayfair Works, Vauxhall finishing as head of maintenance and buildings.