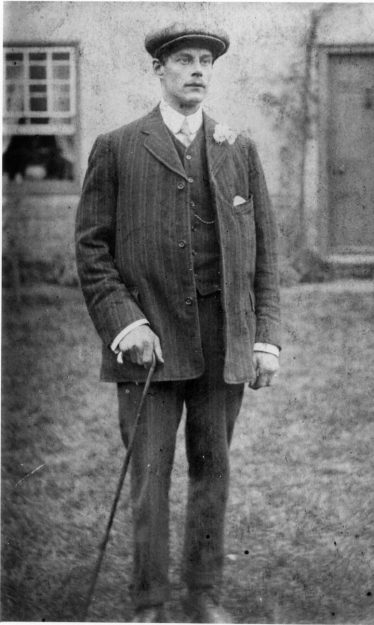 zoom
Mr George Holloway Dressed for his Wedding?
Copy by I Walters for Mr Barker

There must have been some sort of crisis in the Ashwell Football Club as a meeting was held at the Bushel & Strike to form a new team, for which there was much support. Mr George F. Pack convened the meeting and Mr W.A. Fordham was appointed President.  It was agreed that the new club was ready to arrange fixtures. The true history of the club at this time is shrouded in a little mystery to me as we have, in the museum, pictures of teams from 1899, 1908 and 1920 so it had already been thriving for many years. On the cricket front it was proudly reported that two Ashwell players were represented in the North Herts League Champions vs The Rest game held at Arlesey. They were H.P. Pack and J.W. Bailey who was also captain.

The long running story of the mains water and sewerage works continued. On the one hand the Ashwell District Council   Ashwell Parochial Committee presented the Final Certificate of the Engineer, for £146.1.1d, due to Messrs Bailey & Co.  On the other hand the draft ‘sale of water charges’ was again considered and then adjourned for another day.

An auction was announced of the stock-in-trade and household furniture of Mr Wood, a wheelwright, of Silver Street who was leaving Ashwell.

Two deaths were reported that of John Waldock, 68, of Mount Pleasant Cottage, Ashwell and further afield at Ponder’s End, Mrs Seebohm, sister of Mrs W.A. Fordham. She was much remembered in the village for her kindness and hospitality to Ashwell Boy Scouts. Mount Pleasant is the Victorian terrace which is now 3 to 9 Lucas Lane.

There were also two marriages reported this month. At St Mary’s Church on 17th September Miss Lizzie Anne Dellar, the eldest daughter of Mr & Mrs David Dellar married Mr R Massie of Much Wenlock, Shropshire. The reception with over 50 guests was held at “Elbrook”.  At Tunbridge Wells on the 20 September Mr George Holloway of Ashwell married Miss Florence Mary Driver. A copy of a photo in the museum collection which is labelled Mr George Holloway appears to be from this near this date and he is perhaps dressed for the wedding wearing a buttonhole.

The celebration of another year’s harvest at the Wesleyan Church was combined with a fond farewell to their organist Mr Jas Smith. The first farm harvest supper of the season was given to the staff of Bluegates Farm by Mr W.A. Fordham.