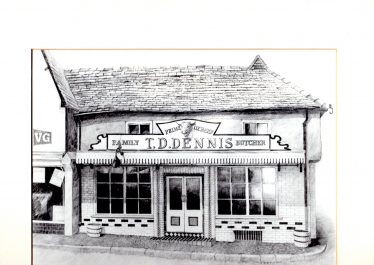 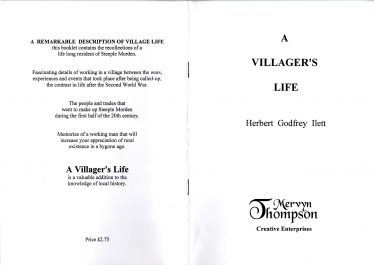 Mr Dennis (Tommy as he was known) was a dynamic man full of energy, of very smart appearance, always with a clean white apron.  He had started the business after the 1st World War.  He had been a Sgt. In the Army and had served in India.  At first he and his wife, Jessie, had cycled round the villages to their customers, then he had a motor cycle and side car, but by the time I got there he had a one ton Ford van, later to be followed by a 15 cwt (762kg) Ford which had a gear lever.  The 1 tonner had pedals on the floor, one for forward, one for reverse, the accelerator was on the right hand side of the steering wheel.

When I started there I worked alongside Bill Beale, Reg Pickett and Syd Reynolds, Miss Morris was in the office and Violet Goodchild who helped with the housework and in the shop.

Before the war (1st) Tommy had himself been a butcher boy, he was a native of Potton and worked for Oliver’s in Blackbird Street.  He used to tell of how he had to work the sausage machine by riding a bicycle, the wheel powered the sausage machine.

We also fetched his meat from Smithfield Market with his motor cycle combination.  He was a purveyor of chilled and frozen beef (Argentine or Uruguay) and New Zealand lamb.  And pork, the only meat being home killed, except at Christmas when he would go to Hitchin market and buy a Prize Bullock, usually Aberdeen Angus, which came from the Bowes Lyon Farm at St Paul’s Walden, Bowes Lyon was the present Queen’s Mother’s brother.  This animal would be killed by Tommy, a pole axe being used to stun it before having its throat cut to release the blood.  It would take three or four of us to hold it down to the block by means of a rope threaded through the block which was around the bullocks head or neck.  I never knew him to miss the small target at which he had to aim which was right in the middle of the forehead, to miss would have meant a crazy animal to deal with.

I suppose he had an influence on my future life.  He had two pet sayings one ‘Cleanliness is next to Godliness’, the other ‘Scrub the corners and the middle will scrub itself’, meaning scrubbing the shop floor, which had to be done every Monday and Thursday.

The pigs were killed by one of the senior butchers.  Although I did  get round to killing before I left, I was never keen to do it.  The method then was to put a strong cord in the pig’s mouth pulling it tight round its snout.  Putting the cord over a hook which then brought the pig into a sitting position where it was held by putting a knee on its back while holding on to the cord.  Then whoever was to kill it would go down on their knees to cut its throat.  After killing it had to be put in a tub of boiling water and a scud was used to get the hair off, this was a job to be done on a Monday ready for the week’s sales, sometimes on a Wednesday as well.  Also Monday was a day to scrub the meat baskets, wicker ones, which were large and used to deliver orders from door to door in, trays weren’t used like they are today, which are easy to wipe.

Another thing in those days was the ice-box, we didn’t have refrigerators then.  It was a bit like a strong room where we kept the meat which wasn’t wanted for sale in the shop, also putting everything back in at night.  The ice was delivered in blocks weighting about 1 cwt (50.8kg) each, they came twice a week by van, 3 or 4 blocks were left, which were put in the ice-box.  The door being made secure by a large handle (you kept the door shut at all times except when taking meat out or putting meat in) it was kept in a room at the back of the shop.

The sausage making machine was in a cellar below the shop along with the brine tubs, they were used to salt the pork usually belly pork and beef, usually silverside, one tub was being used for beef and one for pork.

I well remember my first winter there as a butcher, 1928/29 was very severe, it started freezing in February and went right into March.  Whence came the saying ‘I can remember when we had 6 weeks frost in March’, meaning the town of March in Cambridgeshire.  It was very cold, we couldn’t cut the meat, we either had to saw it or chop it, my hands were always cold, gloves couldn’t be worn handling meat.

During the spring of that year I was joined by another boy from Morden, Stan Cherry, he had been working at Gatley End Farm which was farmed by Hogsdon’s.  Unlike myself he stayed with Tommy until he was called up for the Army, remaining a butcher in the Army and taking it up again when returning to civvy street, first at Letchworth then at Bassingbourn where he still works part-time for Playles in their freezer department.

Bill Beale was the first to leave Dennis’.  He was replaced by Bill Glascock who came from Royston, he got a council house in Ashwell after coming from Royston for a while by motor cycle.  It was while out with him I started to drive the 1 ton Ford.  Driving from door to door before attempting long drives on by-roads such as the road between Eyeworth and Ashwell via ‘Mobs Hole’, now called Northfields.  That was before I was sixteen, I had no licence, I couldn’t get one until I was seventeen, but traffic then was almost non-existent.

My job meant I had to do a lot of cycling.  It would be round for orders in Ashwell first thing in the morning and then deliver the orders later.  Then on Tuesdays and Fridays it meant cycling round the Mordens, this was with a heavy carrier bicycle which had Dennis’ name plate on it, just under the cross bar, and a large basket for meat in front of me in the carrier attached to the frame in front of the handle-bars.  I would also cycle to Hinxworth and Edworth plus all the outlying farms, if any one lived out of the way you could bet we served them.  Also to Newnham and Bygrave, one customer at Baldock and another at Wilbury Hill, Letchworth.  Tommy would go miles to get a customer, no order was too small, I’ve cycled to Wilbury with 1/- (5p) worth of pudding beef.

The next school leaver to join us was John Norman from Newnham.  Rene Waterworth also came taking over from Violet Goodchild who left to get married.  Rene later married Don Bryant.

We had to work long hours, starting at 7 am each morning until 6.30 – 7.00 at night.  Fridays and Saturdays would be 8 pm or even 9 pm.  In the summer Saturdays were even longer, 5 am to sometimes 10.30 or 11 pm before getting back from the rounds.  This was because our customers did not have refrigerators then, so no one wanted their meat delivered until Saturday.  In the winter they didn’t mind having it delivered on Friday.  Thursday was our half day, but we never finished before 2 pm.

One week’s holiday was all we had then, but nobody would get a week straight through, having to be back at work on Friday and Saturday for the weekend trade again.  At Easter we would work all day Thursday also most of Good Friday.  And Christmas, or rather the week before, always meant a lot of work, it wasn’t a holiday as it is now, just 2 days, not 2 if one of them happened to fall on a Sunday.

It was soon after I started to work at Tommy’s that my mother thought I ought to learn to play the piano so we went to Royston to see a music teacher.  I had four lessons, at 5/- (25p) an hour, before throwing it in.  I just wasn’t musically minded, neither was I keen on cycling to Royston each Thursday on my half day.  I preferred to go to the cinema at Letchworth with Fred Izzard, Stan’s brother, who also worked at Ashwell for C.H. Westrope the grocer, and Stan Cherry who worked with me.

At the time I was with Tommy Dennis there were also 2 other butchers in Ashwell:  Mark Crump, father of Philip who now runs the business, and Eddie Brown who had taken the shop over from his former employer Jack Ashwell, ‘Ashwell’s butcher of Ashwell’, he also employed the Tyrell brothers ‘Chris and Freddie’.  Eddie Brown was married to a Steeple Morden girl, Maud Peck, who was the daughter of John Peck, they lived up The Green, Steeple Morden in what was the Old Club Row.

Apart from the villages I mentioned I used to cycle to (I left out Ashwell Station and Odsey) we used to serve, by van, every Tuesday, Friday and Saturday at Dunton, Eyeworth, Sutton and Potton and later Litlington, Abington Pigotts, Bassingbourn and Kneesworth.  Tommy would go anywhere for business.

We all went one Thursday afternoon to the Royal Smithfield Show when it was held at the Royal Horticultural Hall.  We visited the D.B.C. ‘Danish Bacon Company’ whose products we were now selling.

Butchering has changed a lot since my days at the job.  The carcases are now delivered ready for cutting up which means there is not all the clearing and cleaning up we had to do, in fact they hardly know they are working now.

Sunday 24 July 2011 – kind permission has been granted by Gladys Ilett to reproduce this interesting article which appears in ‘A Villager’s Life’ by Herbert Godfrey Ilett.  Gladys remembers visiting her grandmother, Martha Barton, who lived in the Ashwell Museum building when Gladys  was a little girl – approximately 1920s