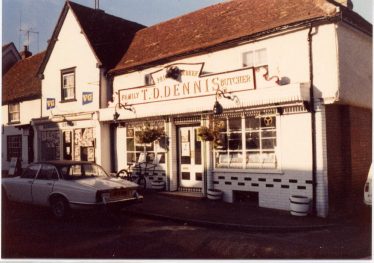 There were quite a collection of shops in Ashwell, 20 according to the Ashwell book written by Albert Sheldrick and Norman Gurney.  In my recollection there were two other large grocers and several small corner shops trading in someone’s front room.  Westrope’s was our main competitor who also sold drapery and the Coop.  I did not ever venture into Westrope’s but was sent to the Coop with a message for the manager, Mr Raven (Skip) on a couple of occasions.

The chemist’s shop was called E.  Russell and the manager was Guy Barrett, with whom we got quite friendly exchanging the occasional visits for Sunday tea with him and his wife.

There were three butchers and the main one was T D Dennis, our next-door neighbour.  This was a very classy shop with plenty of red and white paint, topiary box bushes in pots and even a bull’s head in the centre of the sign with glowing red eyes.  We patronised Tommy Dennis (Disher) as we lived next door but I don’t remember them buying much from us.

The other two butchers were Crumps of Mill Street and Eddie Brown (Too True) right opposite the chapel in the High Street.  There was also a Fish shop owned by Crumps next door to their butcher’s shop.

Another important shop was Day’s the Bakers in the High Street.  Howard Day was in charge and was a cheery, jolly man who greeted everyone in a very friendly way.  We ate a lot of bread, a large loaf every day at least.  Mum was teased about boasting to a shop customer “My Peter eats 10 slices!”  I seemed to be everlasting nipping over to Day’s for large loaves costing seven and a half pence (pre decimal), which I then sliced up for tea.

I don’t remember buying a lot of cakes as we sold our own (Lyons Kemp Scribona) and so had to eat them.  I can remember going there on Good Friday mornings before breakfast to buy real Hot Cross Buns, fresh from the oven.

Howard Day made our Wedding Cake and advised me to only have a single tier and not have much more cake than was needed.  He felt the extra expense was a waste and the money could be put to other things.

Other shops we used were Christy’s the Newsagent and  Coal Merchant who also manufactured fizzy drinks, they  were situated  directly opposite our shop.  Stamfords, the Drapers owned by Winnie Stamford with her two sisters was further down the High Street and was always rather an old fashioned shop but handy for underwear, haberdashery and the odd blouse or cardigan.  There was a Post Office, run by Mr and Mrs Proudfoot and Barclays Bank from Royston came to the Three Tuns twice a week and used their back room as the banking hall.  Dad was quite matey with the bank teller and this was how I came to get a job eventually with Barclays Bank at Letchworth, when I left school in 1955.

Another shop was Bonnet’s, the Tailors in Mill Street next door to the “Bushel and Strike” pub.  The two Bonnet brothers, Clifford and “Boy” were a couple of characters, quite elderly and very old fashioned.  They had a mine of odd similes which they popped into the conversation; “Damp as the bottom of a pond”, “Lying there as rotten as a whale”, “Full as an egg” are just three which our family have used for years since.

I visited their shop once as I had a blue suit of Aunty Gladys’ which needed some small alterations.  I was invited to go upstairs, which was very hot and stuffy being heated by a black, pot bellied stove and went behind a screen to put on the skirt.  I think “Boy Bonnet” did a good job but I did not wear the suit much, always feeling it was a bit frumpy and dated.

Another memorable shop was Collis’s, the bike shop and taxi service.  He also sold sweets and cigarettes along with the bike parts and had an area at the back of the shop where second hand clothes were displayed.  It was a family joke about seeing “Mrs Collis’ Gardening Knickers” hanging on this “washing line” display.

Bertie Collis’ Taxi’/wedding Car was a Vauxhall Velox and I was privileged to travel with Dad the 100 yards from the Parade House to Ashwell Methodist Church on 20th June 1959 and then to the reception held in St Georges Hall, the back room of the Bushel and Strike.  I don’t think Bertie was exactly smartened up for the occasion and I felt slightly critical of his appearance.

“Alice Anderson” was the ladies hairdresser and Mum and patronised her from time to time though I cannot remember where the men folk got their hair cut.

There was Bluegates Dairy next door to us and we had our milk delivered every day by Robert Sheldrick.  Charlie Winter was the manager and his wife Susan served in our shop most afternoons.