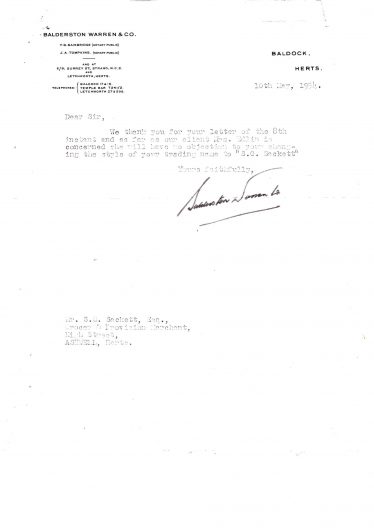 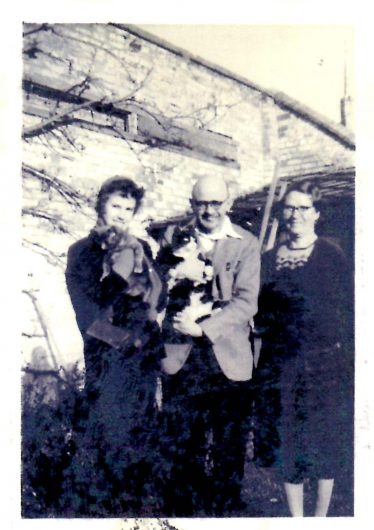 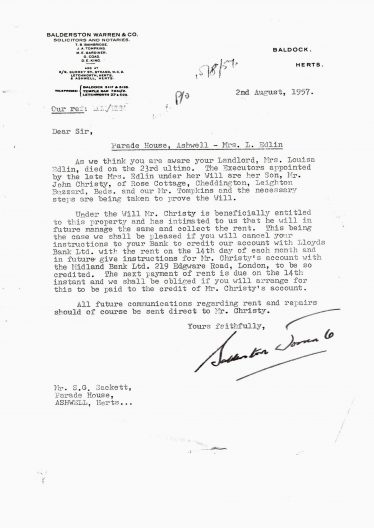 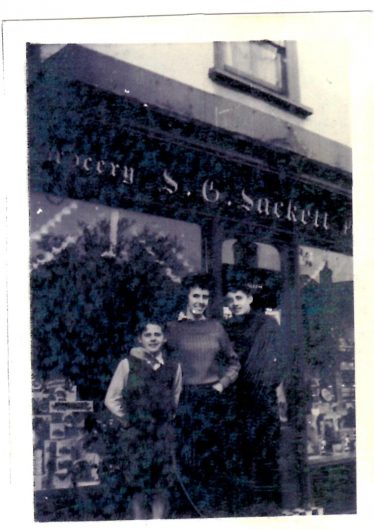 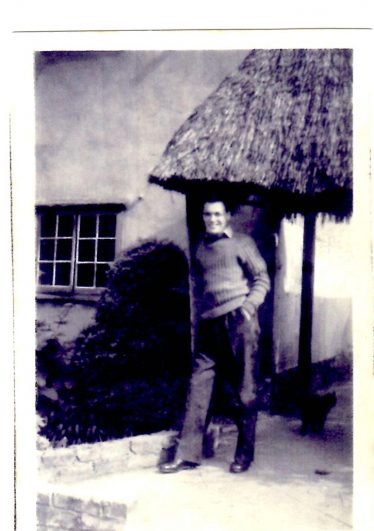 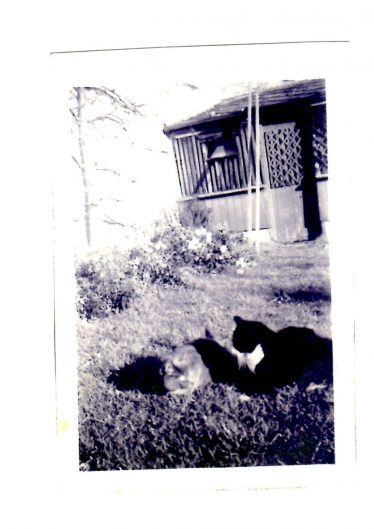 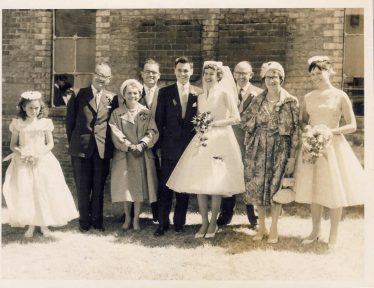 Mr Sackett was born in 1908 at Shoreditch, London, he attended The John Lyon School, Harrow before joining the Merchant Navy.  He married Muriel Eva Blackburn in 1933 at Brentwood, Essex.  Mrs Sackett was born in 1908 at Ipswich, she was a teacher at Shenfield School, Essex.  Mr Sackett died in 1971 and Mrs Sackett in 1984 both at Portbury, Somerset.

Mr and Mrs Sackett had three sons, Peter, Colin and Derek and one daughter Hazel.

Eric Gurney was running his late father’s corn merchant business on his mother’s behalf and started selling KiteKat (tinned cat food) in bulk to the village which did not please Mr Sackett.  Mr Sackett decided to sell the business offering it to Eric and Audrey Gurney for £6,000.  .

Hazel now lives near Bristol and wrote the following:

My parents purchased the goodwill of the shop from Jeff Wilson and his partner Mr Gardiner. The shop was called J H Christy & Son originally but my father eventually had the sign redone to S G Sackett.

This business turned out to be not quite the romantic little village shop that my parents had envisaged.  Mum and Dad were quite green to the grocery business other than when Dad spent a week or so at Hipkins Grocers in Stickford, learning the trade.

Mum was supposed to be just helping to serve in the shop on a part-time basis but staffing proved to be quite a problem and she gradually became full-time. Doris Davies was a real gem however and had worked in the shop for several years.  She was an attractive country girl with blonde curly hair, brought up in Guilden Morden, and was immensely strong, efficient, an excellent mathematician and good at dealing with awkward customers. We had a couple of very smelly old customers and she used to light up a Woodbine and blow the smoke over the counter to keep them back from her.

Her husband was Bob, who was a “strong as a horse” farm worker. He and Doris started married life in a small cottage in Back Street.  When they had twins they moved into a bungalow in the High Street at West End.  Tragically Doris died from breast cancer at a very young age but Mum and Dad kept in touch with Bob for many years

Mary Chapman, Doris’s sister, also worked for us but in the house.  She had been “in service” from the time she left school and had been taught the proper way to do housework.  You could always tell when Mary had made your bed; it was so smooth and neatly tucked in with “hospital corners”.

Dad was initially in the shop but gradually became more and more involved doing the grocery rounds.  The black van, an Austin 8, which had been sold with the “goodwill” and stock of the business, turned out to be a “bum steer”.   There always seemed to be something wrong with it right from the start.   Dad had a driving licence as he had driven a motorbike at one time and that covered driving a car as well.  However he had lessons from someone in the village and with quiet country lanes managed to get by without any accidents.  The gear stick came out in your hand when changing gear and the spark plugs needed sand blasting on a regular basis.

The buildings were very old and always needing repairs and maintenance, particularly the flat roof over the back part of the shop, which was forever leaking.  Dad fought a constant battle with trying to keep this watertight and was always putting tarred sealing tape along the joins and other “make do” efforts.  Mrs Louisa Christy was our landlady at first and was a very autocratic old lady, who never considered anything my parents asked to be repaired as being her responsibility.

When we first moved to Ashwell there was still Wartime Rationing and I can remember helping to sort out the sweet points vouchers and the different sorts of grocery vouchers.  Some of our customers worked on the land so we had “Ag” (Agricultural) vouchers to be separated out from the normal variety.  I think it was soon phased out but there was a great shortage of good quality food items and the big companies were reluctant to open new accounts.

We had a stroke of luck, which helped Dad to get some new accounts.  This was “us kids” finding a quantity of old invoices (1870’s) up in the roof of the back store, which was over the bacon shed.  It was holiday time and with bad weather and nothing much to do we were exploring this storage area.  One end, which joined onto the back of the bathroom, had not been sealed off and one could get behind the hardboard bathroom walls and into the large cupboard, which opened, onto the back stairs.  Also the brick chimney from the Green room went up in this space.  Peter decided to climb up the outside of the chimney, which had rough uneven bricks enabling him to clamber up into the roof space.  He brought down these very dusty and ancient shop invoices and orders, but we did not think they were that interesting. However Dad wrote and enclosed samples to the companies that used to supply Christy’s with Bath Oliver biscuits, Batgers figs and Jersey caramels, Huntley & Palmer biscuits, Twinings teas to mention but a few.  He emphasised how the shop was still in business after all these years and how he wanted to carry on selling these traditional goods.  In due course accounts were opened with these companies .

The shop not only sold the normal foodstuffs and groceries but also ironmongery including Robbilac paint, Paraffin, Greengrocery, Lyons ice creams, loose sweets in the old traditional jars and chocolate.

All of my brothers, in turn, became the “shop boy”, which involved delivering groceries and paraffin to customers riding the shop bike with large basket in front to carry the goods.  Other duties were sweeping up the shop at the end of the day, putting out the rubbish, washing the floor once a week on Saturday afternoon and sharpening the bacon machine.  Peter recalls what a hazardous job this was and wonders that none of the family lost a finger in the process.  I was “employed” in the house for the kingly sum of ten shillings per week.  This consisted of getting the tea ready each night for the family, which was a “high tea” type of meal.   On Saturday I had to get the breakfast for the boys and wash up afterwards and then make the beds, carpet sweep the dining room and clear out and relay the fire.

We had a rota for helping with the washing up after tea each night but the boys always seemed to put their name down for a night when they knew they would be out.  I can remember moaning about this until I realised that Mum was exhausted after being on her feet all day in the shop and just a bit of help with this simple job would make all the difference.  We used to have nice chats while doing the dishes and it was not such a chore after all.

Staff:
We employed Doris Davies initially and my mother worked with her. Later when Doris left to start a family we had Rene Worboys, Dorothy Meakin and Susan Winter doing part time work. My father was mainly out on the round delivering weekly orders to villages around Ashwell.

Delivery boys:  one at a time were Roger and Richard Andrews, my 3 brothers in turn and and Roger Glasscock.  I was mainly “working” in the house after school and weekends as Mum was so busy in the shop working full time.

Though we did have some odd people coming to the back door on Sunday mornings, usually wanting “tick”.

Acknowledgements:
This document was researched and typed by Jackie Embury with the help of Hazel Easterbrook (Sackett).