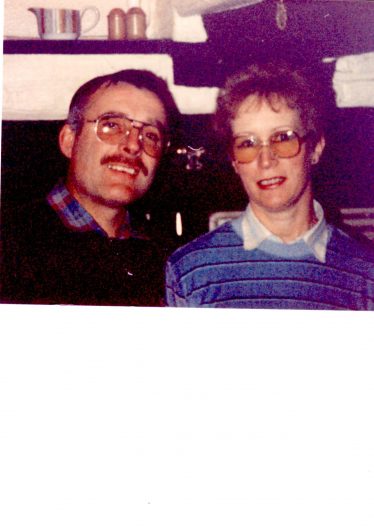 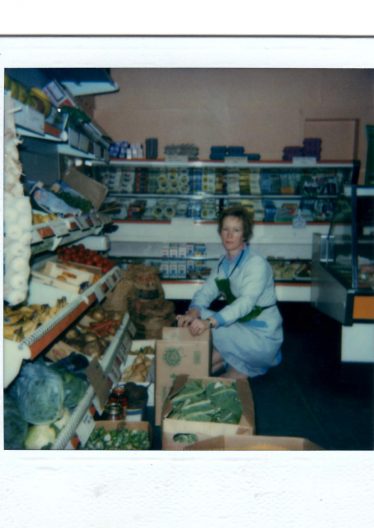 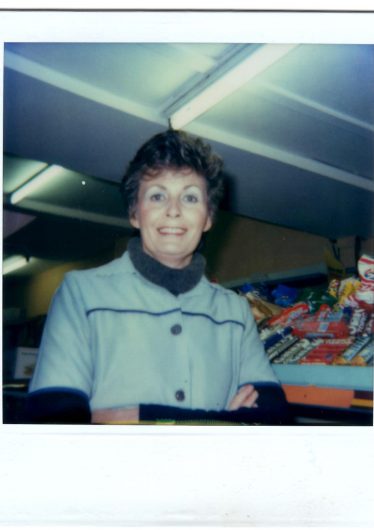 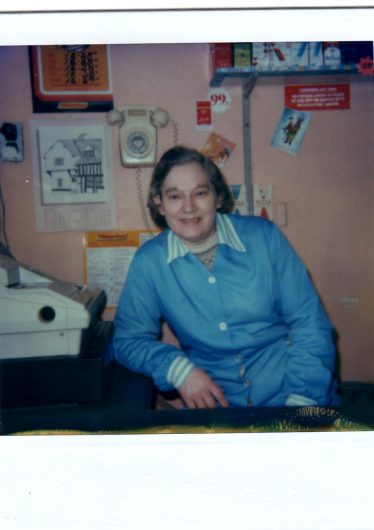 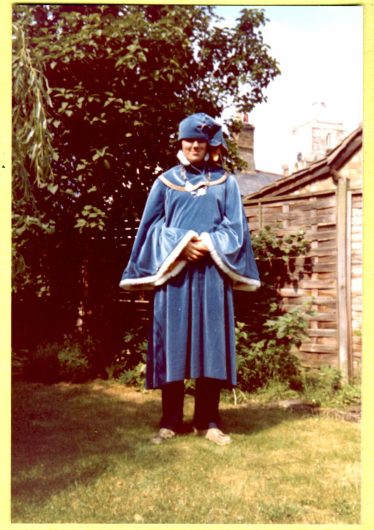 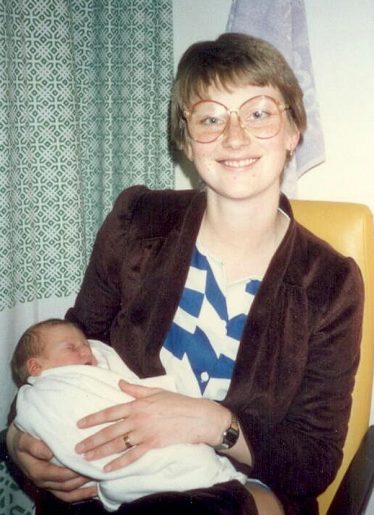 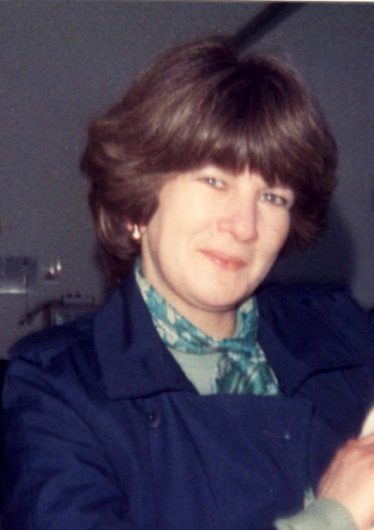 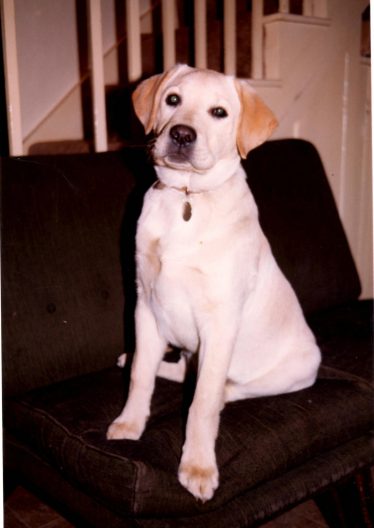 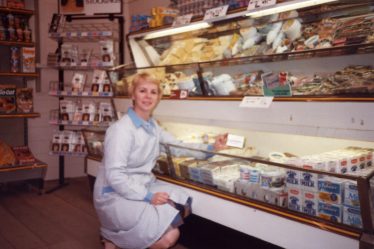 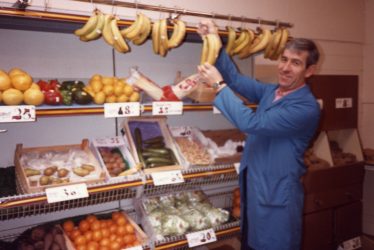 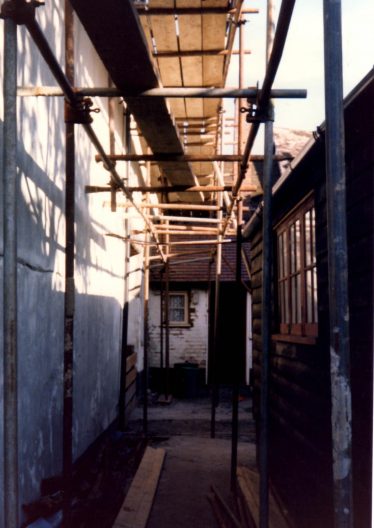 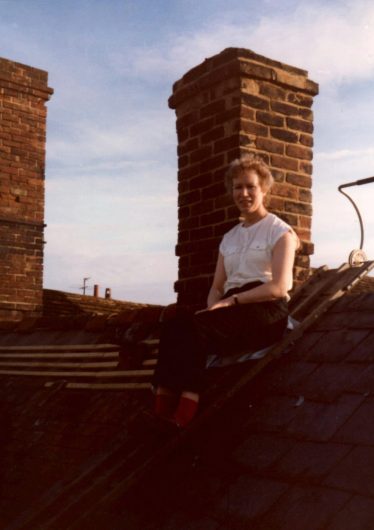 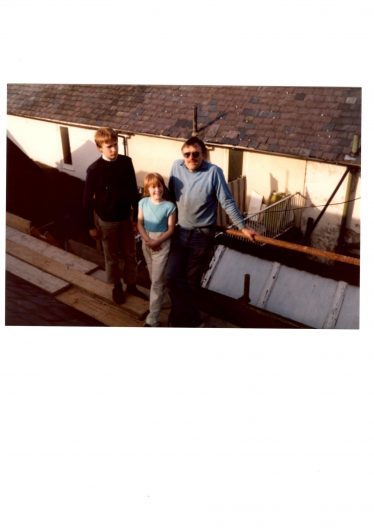 Guard Dog:
Amber                                        1986 - 1987
Amber was a large yellow Labrador who loved children, on occasions joining them on the school bus which picked the Knights Templar pupils up outside the shop and on another occasion escaping from home to join the children in class at Ashwell Primary School, he also enjoyed the odd visit to Crumps.

The highlight of Amber’s week was taking Olive’s duster so that she would chase him; I think Olive enjoyed this too!

Orders delivered:
Regular orders taken during the week for delivery on Thursday and Friday by delivery boy on the shop bike, orders further afield were delivered by Roy or Jackie by car.

On Mondays Bookers large lorry would arrive in Gardiners Lane anytime from 7 am on.  There would be more than 20 pallet trolleys of stock to check off, price up and put on the shelves;  after school the delivery boy also helped stack excess stock from the Booker (VG) delivery in the warehouse and broke the boxes up for refuse collection.

Roy and Jackie together with their son Robert (12) and daughter Anne-Marie (7) moved to Ashwell Stores (VG) from Kimpton, Hitchin, on Friday 12 October 1984.  With the much appreciated help of existing members of staff, Brenda Fitzgerald and Freda Brocket, they began to rebuild the stock and refurbish the shop.  This was a major undertaking which took a considerable time to complete, replacing the whole of the wooden floor, redesigning the layout, replace shelving, equipment and redecorating all of which had to be carried out when the shop was closed for business.

It was already a self-service shop and off licence offering a wide range of grocery and general items but lacking in greengrocery, this was soon rectified.  The back of the shop became a greengrocery section with new shelving displaying a wide range of fresh produce; this was a very successful addition to the shop and one the village appreciated.  Other services introduced were dry cleaning and shoe repairs.

For the business to be viable, monthly accounts were disposed of and only a very limited number of weekly accounts were held – after all so much had changed, bank interest rates were high and this type of credit was not available with the national chains.

Saturdays were extremely busy opening at 9 am there would be a constant stream of customers stretching all round the shop and out of the front door.  Two assistants served the greengrocery, while two more kept it filled up; there were two assistants on the check out, one operating the till and one helping to pack while a delivery boy took out orders on his bike.

On the weekend people enjoyed the Ashwell shopping experience, having had their newspapers delivered by Byron Searle and his team of paperboys (Robert being one) they visited not only Ashwell Stores but Days, Crumps, the Post Office, Ashwell Pharmacy, Ashwell Delicatessen and Rodney’s Flower shop in Dixies Barn, there was no need to go out of the village.  At 1 pm the shops closed everyone had managed to do their shopping, now they could relax and enjoy the weekend surviving until the shops opened on Monday morning, so different to today!

Lachlan Colquhoun, the delivery boy, was a real character he was much loved by many of the residents of Wolverley House who looked forward to their order being delivered each week.

Upon leaving school Lachlan worked for us full time until he found a position as a sales assistant at Fortnum and Masons food hall, London.

When Westropes closed Sharon Livings (Watson) came to work for us and shortly after she was joined by her sister Trisha Watson who was working at Ashwell Delicatessen (now Rhubarb & Mustard).  Trisha left the following year to work at Tescos Baldock, later becoming a manager.

When it snowed, usually January/February time, it seemed as though the whole village converged on the shop.  Roy and Jackie always made sure they had extra provisions but often the shelves became empty in no time.

1984/5 Kingswood Chemist closed a number of their smaller outlets nationally, Ashwell being one.   Kingswood Chemist sold the premises which meant Mr Barr the Pharmacist retired.  Ashwell Surgery was able to dispense prescriptions to people living a mile from the surgery, ‘as the crow flies’ and if there was no pharmacy in their village but this left the Ashwell villagers without a dispensing service and general pharmacy goods.

Mr Beardwell, Manager  of Kingswood Chemist, approached us and we agreed to take receipt of prescriptions from Ashwell patients;  Kingswood Chemist at Baldock would collect and deliver the dispensed prescriptions to us daily for later collection by the patients.  We also stocked some of the general pharmacy lines and provided a photographic service which were no longer available in Ashwell.

During this time Jenny Hunter (Harris) joined us and stayed until Raksha opened a Chemist shop in Dixies Barn where Rodney’s flower shop had been.

In 1985 Jackie’s sister Elaine and brother-in-law Gerry looked after the shop with the help of Brenda and Freda which enabled the family to have a much needed holiday.

In the three years 1984-87 Roy and Jackie increased the business to such an extent that Roy had to decide whether to leave his engineering employment to join Jackie full-time in the shop.  It was at this time that the social scene was changing in a dramatic way with the opening of Sainsburys at Letchworth and Tescos at Baldock.  Westropes had already ceased trading and closed.

Tescos put on free buses to the village and surrounding areas, stopping outside Ashwell Stores to collect customers taking them to their new supermarket – this lasted for approximately six months but the damage had been done, people’s shopping habits changed along with their expectations.

Roy and Jackie could see that their shop would have to become a convenience store, no longer a supermarket where villagers did their weekly shopping;  this would mean longer opening  hours, being open all weekend and on bank holidays (see current opening hours under Jeet Dahdra for comparison).  So the decision was made to sell the shop.   However they are pleased to see that the shop is still in business today albeit in a very different format.  They now enjoy their retirement in Ashwell where they have made many friends.

Memorable events:
During a storm in 1986 a large part of the warehouse roof was destroyed.  The refurbishment work was carried out by local builder Mick Carter and his sons (M.R. Carter & Sons).  The roof timbers had to be strapped back into place; these timbers were made from roughly hewn trees.  Also a number of clay pipes were found and donated to the museum.