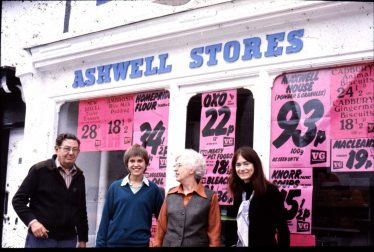 My parents bought the shop in 1968. I was 16 and not keen to move from London. I have two sisters – Catharine was only three when we moved from London. She went to Ashwell Primary School and was much more part of the village during her young life than I was. My elder sister, Elizabeth, had left home by then and never lived in Ashwell.

My parents bought the shop from Mr and Mrs Thomas, who I think owned the shop for a couple of years; they bought from Eric Gurney.

The shop was always officially “Ashwell Stores” but always known as the “V.G.”

My parents were in the VG group, the wholesaler then was Harvey, Bradfield and Toyer, Stevenage. The rep used to call once a week for next week’s order (pre-computer) and also for the cheque for the previous week. Not sure what would have happened if the cheque hadn’t been there, thankfully my parents managed.

My parents then had weekly and monthly customer accounts which were not always settled that quickly. They also inherited monthly accounts and weekly deliveries by van (village deliveries by shop bike) to Bygrave, Newnham, Radwell and Ashwell Station.

The crunch in the 1970s and 1980s meant that paying weekly to HBT Stevenage caused big cash flow problems. This was sometimes difficult to explain to certain customers who wanted to open a weekly account. In those days of deference my father found it difficult to refuse or explain this.

There was no off-licence because my parents were always frightened of burglary – they had three during their time.

I well remember Brenda and Freda – in 1968-69. I was not allowed to be in the shop because I had very long hair, but I remember working in the back de-boning bacon for the bacon slicer etc (it was delivered by the side, wrapped in cheesecloth).

The delivery/shop boy when we arrived was Martin Geeves; he was about the same age as me. He was living in the corner of Wilson’s Lane in the High Street.

The other shop boy was Edward Kennedy, I knew him very well later on – I think he is now with Richard Waterhouse Pianos in Arlesey.

I moved from Ashwell in 1972, then opened an antique shop next door (Parade House) in what had been the shop office (planning permission was a bit of a struggle) in 1977.

Peter and Margaret retired in 1982 moving to Comberton, later moving to Alan Percival Court, Cambridge.  Peter died in 2002 and Margaret died in 2004;  their son Hugh remained in Ashwell for some years running an antique and renovation business off Silver Street.

All a bit different today!

Acknowledgements:
This document was researched and typed by Jackie Embury with the help of: