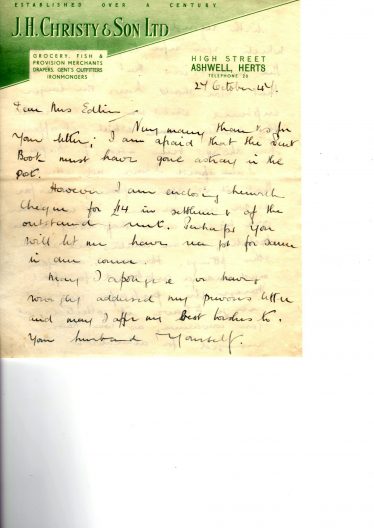 zoom
A letter sent from Kit Wilson to Mrs Louisa Edlin (Christy). The letterhead confirms that the Christy family owned the shop for over 100 years.
Patricia Lewis 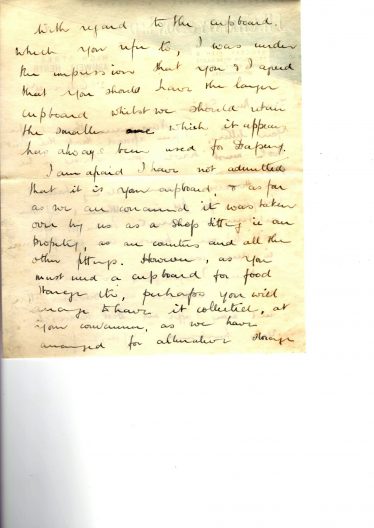 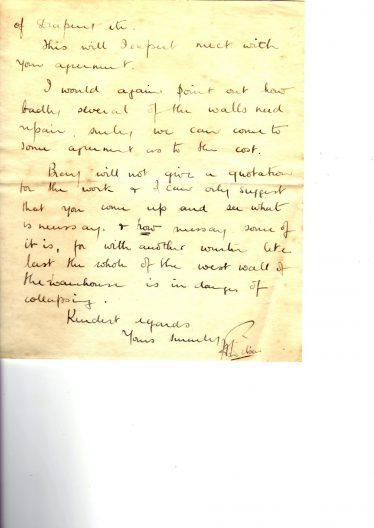 Anna and Kathleen (Kit) moved to Ashwell in the early 1940’s, Anna’s first husband was killed while serving in WWII.  They were seeking a place to live and work which Parade House and the shop provided.  They rented the property from the Christy family continuing the business of grocery and drapery.

Kit’s daughter Joan and her husband Jeff Wilson had both served in the army during WWII.  When they were demobbed they had nowhere to live so moved with their first daughter Jenny into Parade House with Anna and Kit.  Kit’s son Len Rooke had served in the RAF during WWII and on demob also joined the family.

Jenny Wilson and Jenny Hunter (Harris) used to help Yvonne Harris after school weigh up dry goods i.e. sugar and dried fruit which were stored on the first floor of the warehouse.

Jeff and Len continued to work in the shop with Anna and Kit until Len emigrated to New Zealand in the early 1950s.  When Len left, Mr Gardiner joined as a driver delivering orders to customers in and around Ashwell and other villages.

Kit also emigrated to New Zealand joining her son Len and his family.