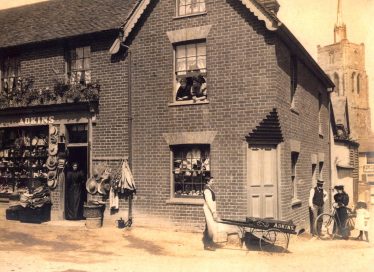 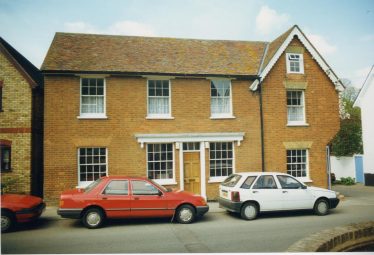 ·        The date showing above the top window of this red-brick building dates it to 1874 but inside the timber frame indicates this may have been a façade surrounding an older property.

·        The upper photograph on the right was taken in 1895 when the building housed Fanny Adkins’ General Store and her home.

·        Fanny herself (the left hand figure looking out of the first floor window) was a formidable Victorian lady – always dressed in black and with a pencil struck in the plaited hair on top of her head.

·        As Christmas approached, Fanny Adkins’ window was one to watch, with wonderful displays of tinsel, coloured paper chains, toy soldiers, dolls, sugar mice and many more treats for the local children.

·        In those times people did not travel far from the village and so the shops had to cater for all their needs.  As the poster here shows, Fanny’s shop sold all sorts of things from halfpenny packets of pins to saucepans, boots and rolls of cloth.

·        During the war the premises were partly occupied by evacuees, a watchmaker and others.

·        When the purpose-built Doctors’ Surgery was opened in Gardiners Lane in 1990, the premises became a Dental Surgery, with a business premises on the corner and a residential flat above.