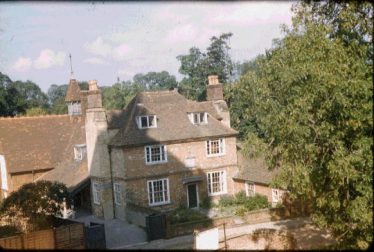 zoom
View from the Church tower, 1956 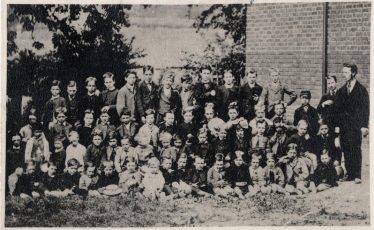 zoom
Pupils c.1876 with the headmaster, Mr Choate, standing on the right 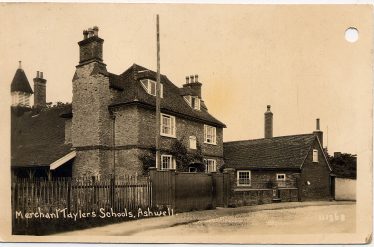 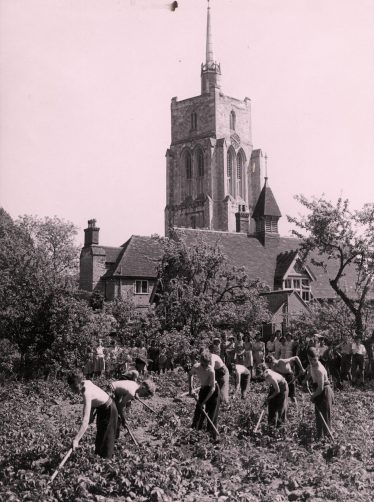 zoom
Boys hoeing potatoes in the vegetable garden, 1940s. Digging for Victory? This area is now (2010) the netball court for Ashwell Primary School. 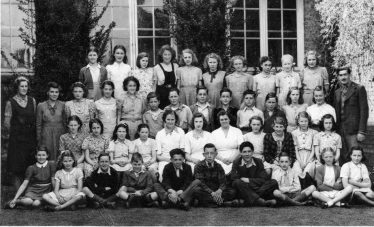 This Grade II listed house dates from 1681 and was the first building actually built as a school in Ashwell.  It is reputedly the earliest brick-built house in the village and it was constructed for a total cost of £290.

It was built as the gift of Henry Colbron, steward and assistant of the Worshipful Company of Scriveners (law writers) in the City of London, who died in 1655 and had land and property in Ashwell and elsewhere.

Henry Colbron bequeathed monies to the Merchant Taylors’ Company for the purchase of land, the erection of a Free School and the support of an endowment in Ashwell.  The Merchant Taylors’ Company is one of the twelve great City livery companies.  It was founded in the 14th century by an association of Tailors and Linen Armourers, but gradually evolved into the philanthropic and social association it is today.

Little is known of the school’s early history, except for the chronology of headmasters, listed below.  They taught in the schoolroom of the main house (ground floor, south side), the master occupying all the other rooms.

1876 was a year of big changes.  The Elementary Education Act of 1870 required for the first time that every parish in England should provide a school for all its children – and the existing schoolroom was too small.  An extension, to include a new schoolroom was planned.  A grand village celebration took place on 26th May 1876 when the newly built Victorian schoolroom extension (now, in 2010, a separate private dwelling), behind the original building, was inspected, along with its 82 enrolled pupils, by the benefactors – the Master and Wardens of the Merchant Taylors’ Company.

At a similar time, in 1878, the current Ashwell Primary School opened as the local Board Schools.  For many decades both schools operated in parallel as follows:

From 1933 the Merchant Taylors’ School became co-educational for 11 to 14 year olds and was now increasingly funded and managed by the Hertfordshire County Council.

The Headmaster’s House and Old School then began over fifty years of community service, accommodating a range of activities including the library, adult education, a field studies centre, infant welfare clinic, business centre, playgroup etc, with the house sometimes occupied by the Centre Manager.

This arrangement ended in 2000-1 when Hertfordshire County Council ceased its lease of the premises from the Merchant Taylors’ Company.  The rent from this lease had supported the Henry Colbron Trust’s continuing charitable obligations to the children of Ashwell.

Attempts were made to create a new Ashwell Village Hall here, but this proposal suffered from financial and political complications and so the Merchant Taylors’ Company, as trustees for the Henry Colbron Trust, decided to retain only a small portion of the land, as an additional playground/netball court for Ashwell Primary School, whilst divesting most of the site for redevelopment, thereby generating charitable funds for the Trust’s continuing beneficiaries: Ashwell Primary School and the social, educational and recreational welfare of the children of Ashwell.

The Headmaster’s House is now a privately owned family home….if only £290 went as far today as it did in 1681!

Acknowledgements:  Includes information from, and with many thanks to: