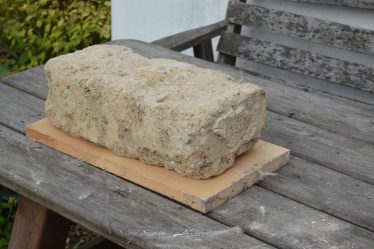 A resume of ideas and research relating to Ashwell and the general history of Clay Bats.

No direct evidence but the Ashwell builders firm Brays used it in the 1980’s for repairing the Gardiners Lane thatched wall.

Was it just a fortuitous adjunct to using cows to mix the material?

Method: Thoroughly mix the clay bat mixture with the lime, then add the straw and continue mixing. Slowly add ½ the water and mix until thick and clingy. – It sticks to everything but must not be too wet.

Lay the mould on a newspaper and fill in layers tamping down as you go.

When dry remove from the mould and then turn on side to dry.

•     1816 Southey in the Quarterly Review reports on ‘repairing bats – a sort of brick made of clay and straw, well beaten together, not burnt but dried in the sun

The Written Evidence from documents in the Ashwell Village Museum

In the ‘Survey of the Farm Homesteads, Private Dwelling Houses, Shops, Cottages etc. made August 1829’ the term ‘CLAYED’ is used throughout.
Although we do not know its precise interpretation, with the exception of a few cottages, it is almost exclusively related to barns and places of work. The following are a few examples:

Work carried out on July 5th 1841 for Mr Charles Edwards involved amongst other items 120 Clay Bats.

An interesting example from the Estimate Book of J Bailey, 1868 – 1888, concerns the Contract for New Stable in 1868 for Mr Leopold Day. Unfortunately we cannot identify the building today.

Work started on 14th July with Slop bricks being used for the footings. Best Bricks were used the next day for parts that would show or need to be hard wearing and then the clay bats were used.
The whole project cost £6 15s 0d

By the 1890’s new work using bats seems to have died away and we only find work repairing or altering clay bats.

The last documented clay bat wall built in Ashwell was at Ducklake House in 1935.