The 'Scottish' Tapestry by Percy Sheldrick 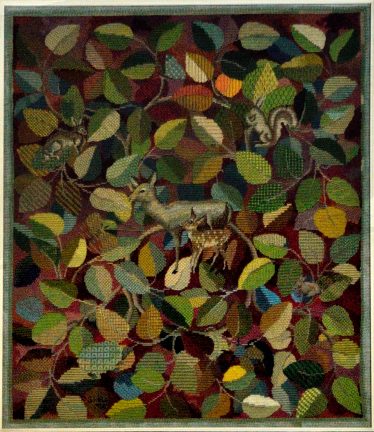 One of the pleasures of being curator is dealing with unexpected offers of objects that fill out our knowledge of Ashwell’s history. Early in the year the museum was offered a tapestry designed and made by Percy Sheldrick. Mr Mervyn French, who now lives in Australia, was given it by the artist. However when he moved from Glasgow he left the tapestry behind to be displayed in his old church. After some years it was taken down but rescued from oblivion by one of his friends. Mr French felt that it should be assured a good home so he decided to sell it but then had the idea that it might return to Ashwell. It was then he contacted the museum and we also thought it was a good idea.

Percy Sheldrick was born in Ashwell and spent most of his life here. After the First War he trained at the Central School of Art and went on to work for Morris & Co at Merton Abbey. From there his work went all over the world. When he returned to the village he carried on working and trained many pupils in the skills of tapestry and embroidery. As a local artist with a national reputation we have been collecting his work for a long time gradually building up a body of his work and an archive of his life. The opportunity to purchase another piece is always greeted with enthusiasm adding further depth to this important area of our collection.

I know there are lots more examples of his work in the village and surrounding parishes. It would be a nice little project for somebody to record as many as we can find and put them into the context of his life.

This work is in fact technically not a tapestry but needlepoint embroidery.   The style is a typical of his late work where natural forms (leaves and flowers) are used to create an all over pattern and then creatures are introduced in unexpected places. Here though there is a central motif of two deer. It is signed, bottom left, P Sheldrick 1968

Having decided it would be a worthy addition to the collection we next had to negotiate a price. An auction house had given what seemed to be a quite high estimate so we countered with a lower bid and were surprised when this was accepted but only if we arranged transport to Ashwell.

Now we just had to find the money. The Friends of the Museum are always helpful in these instances and they agreed to pay a portion. A grant for the remainder was then sought from the Herts Heritage Fund. We are so lucky in Hertfordshire to have this unique charitable fund which offers support for the purchase of objects by museums. Although we had called on their help before they were pleased to help again and very soon we were off to Glasgow to bring it home to Ashwell.

We have filled another gap in the collection by the donation of a work by the well-known artist, Francis King (1905-2001), who retired to Ashwell but could regularly be seen be seen out and about sketching and painting. Our new acquisition, the first by him in our collection, is an unusual view from his house of the back gardens in Silver Street looking towards the school.