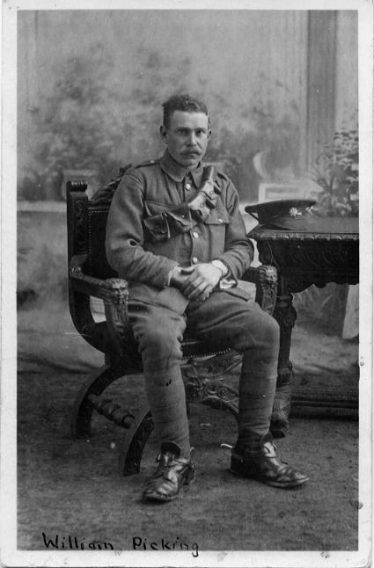 William enlisted on 29th November 1905. He served with the Royal Army Service Corps, Regimental Number T/23856, as a driver with the 1st Railway Supply Detachment and saw active service on the Western Front, France and Flanders. He embarked to France with The First Expeditionary force and took part in the retreat from Mons. In 1916 on his way to the trenches William had bumped into another Ashwell man, Percy Holloway.

William survived the War and died on 19th March 1959. He is buried in the St Mary’s Church, Ashwell cemetery.

William was awarded the 1914 Star, the British War Medal and the Victory Medal.

William Thomas was born at Ashwell, Hertfordshire in the 3rd quarter 1885, second son of Walter and Annie (nee Cole) Picking. He was a pupil at the Merchant Taylors School in Ashwell and before enlisting was a bricklayer’s labourer.

William died at Ashwell on 19th March 1959 and is buried in the St Mary’s Church, Ashwell cemetery.

William’s brother Walter also served in the War but was killed in action.