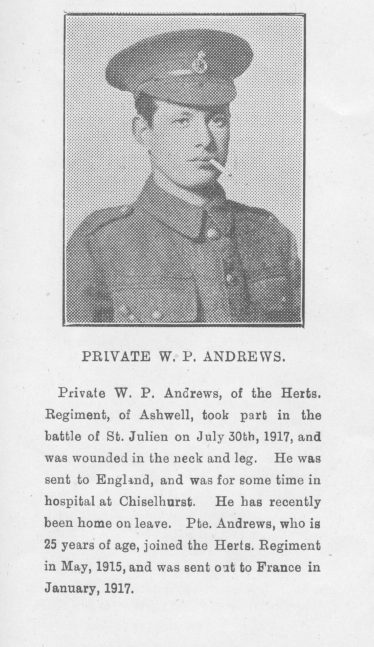 zoom
From 'Our Local Patriots' published by the Herts Pictorial

William enlisted on 5th May 1915 with the Hertfordshire Regiment, Regimental Number 5002. He transferred to the Bedfordshire Regiment in 1917, Regimental Number 266620, and was sent to the Western Front, France and Flanders where he took part in the battles around Ypres and was wounded in the neck and leg for which he spent some time in hospital at Chiselhurst, England.

William survived the War and was awarded the British War Medal and the Victory Medal.

He returned to Ashwell where he died on 27 February 1951.

William was the eldest son of Henry William and Sarah Lilla (nee Ball) born in Ashwell, Hertfordshire. He was a pupil at the Merchant Taylors School in Ashwell.

Before enlisting William was a brewery bottling boy in Ashwell.

William died on 27th February 1951 and is buried in St Mary’s Church cemetery in Ashwell.