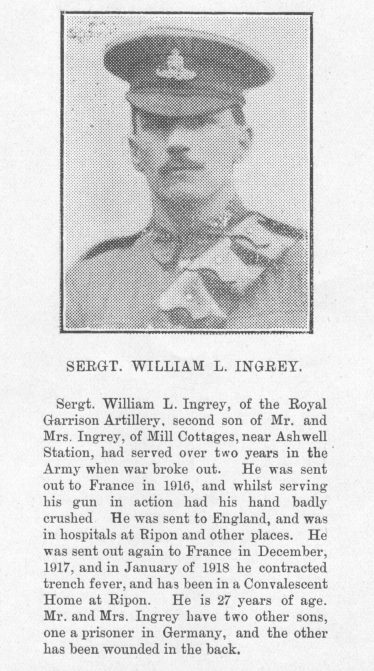 William enlisted with the Royal Garrison Artillery, Regimental Number 38087, on 6th November 1912.  In 1916 he was sent to the Western Front, France and Flanders and whilst operating his heavy gun in battle, his hand was badly crushed. He was sent to England for treatment.  After recovering, he was again sent to France in December 1917.  In January 1918 William contracted trench fever and evacuated to England. William survived the War and died in Sidcup, Kent on 3rd March 1967.

William was awarded the British War Medal and the Victory Medal and was eligible for the 1914/15 Star and the Silver War Badge.

William was the second son of Alfred and Hannah (nee Chamberlain) Ingrey, born at Bassingbourn, Cambridge in the 3rd quarter 1891. He was a pupil at the Merchant Taylors School in Ashwell, Hertfordshire. Before enlisting William was a farm labourer.

William married Lavinia Dorothy Alexandra Blowers at Humberston, Lincolnshire in June 1916. They had two children, William A J born in 1917 and Evelyn D born in 1921.

William died in Sidcup, Kent on 3rd March 1967 and is buried in the Sidcup cemetery.

William’s brothers, Alfred, Albert and Harry all served in the War, all were wounded, but all survived.