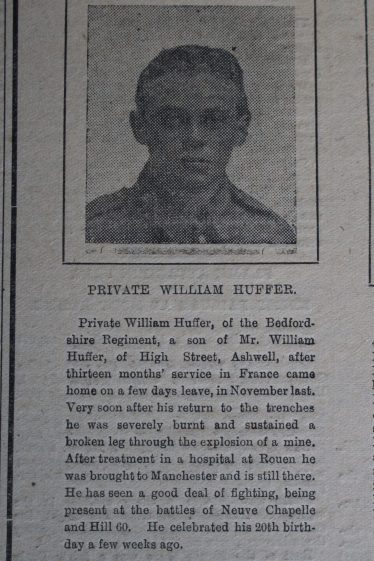 William enlisted with the 1st Bedfordshire Regiment, Regimental Number 4/6757, on 12th December 1912.  He transferred to the Suffolk Yeomanry, Regimental Number 2963, and was sent to the Western Front, France and Flanders on 12th November 1914 where he saw active service at the Battles of Neuve Chapelle and Hill 60.  He sustained a broken leg and severe burns through the explosion of a mine on 30th November 1915 and spent a number of months in a hospital in Rouen.  On 21st December 1915 he was then sent to a hospital in Manchester to recover.  He transferred again to the Corps of Hussars, Regimental Number 305413 and on 15th August 1917 was discharged as unfit for further military service.

William survived the War and died at Ashwell, Hertfordshire on 4th July 1949.

He was awarded the 1914 Star, the British War Medal, the Victory Medal and then Silver War Badge.

William was born at Marylebone, London in the 1st quarter 1896, the eldest son of William and Elizabeth (nee Kirbyshire) Huffer. The family moved to Ashwell when William was about ten so he would have been a pupil at the Merchant Taylors School in Ashwell.  The 1939 census shows him a builder’s labourer living in Ashwell, Hertfordshire.