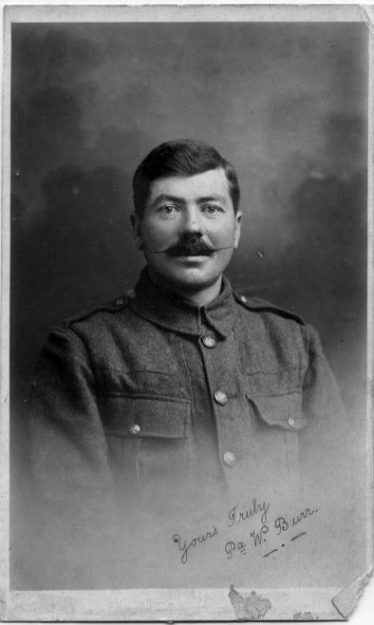 William enlisted at Bedford, Bedfordshire with the Bedfordshire Regiment, 5th Battalion, Regimental number 4005 on 12th September 1914.  He served with the Mediterranean Territorial Forces in the Balkan Theatre of War during World War I.  He was wounded at Gallipoli in August 1915 and invalided home to England.  He was discharged as unfit for military service on 19th May 1916.

William was awarded the Victory Medal, the British War Medal and the Silver Badge.

William was the son of William Richard and Emma (nee Crane) Burr, christened on 4th April 1878 at Ashwell, Hertfordshire. He was a pupil of the Merchant Taylors School in Ashwell.

The 1901 census shows William as a boarder in Christ Church, East Greenwich. He was recorded as a carpenter. His military pension records of 1916 show him as an insurance agent.