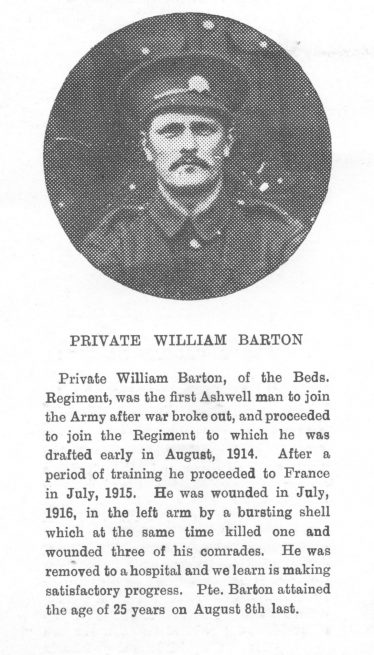 William enlisted in Bedford on 9th August 1914. He served with the Bedfordshire Regiment in France until 1918 when men of all ranks were transferred to the Hertfordshire Regiment.  He served in the Theatre of War – France and Flanders.

William was awarded the Military Medal in 1918 for acts of gallantry. He was also awarded the 1915 Star, the Victory Medal and the British War Medal.  William survived the war.

William died on 26th May 1970 and is buried in the St Mary’s Church Ashwell cemetery.

William was the second son of Martha Barton in Ashwell, Hertfordshire.  He was a pupil at the Merchant Taylors School in Ashwell.

Before enlisting he was a bricklayer’s labourer in Ashwell.

William married Phoebe Daniels (nee Muncey) on 24 December 1923. She had five children from her first marriage. It is not known if she had children with William.

William died on 26th May 1970 and is buried in the St Mary’s Church Ashwell cemetery.