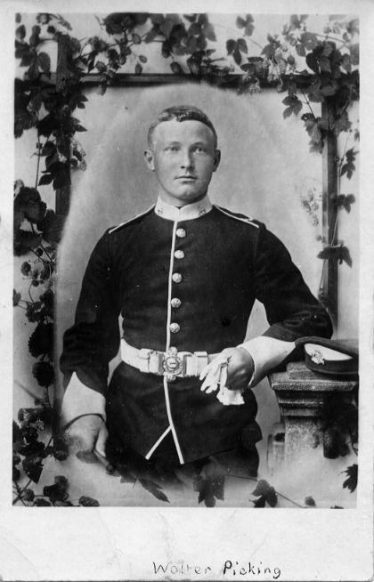 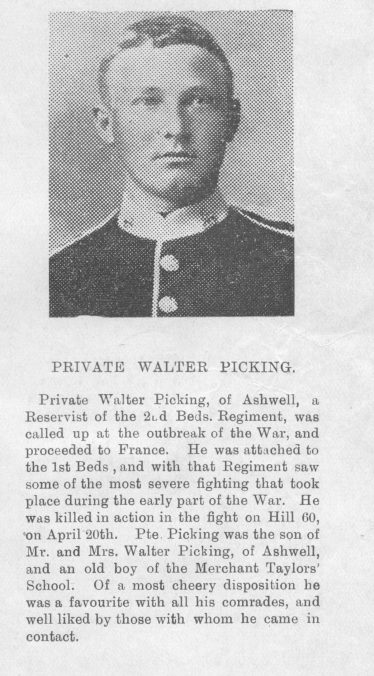 Walter enlisted at London on 8 May 1901 and was a reservist with the 2nd Battalion of the Bedfordshire Regiment.  He was called up at the outbreak of war and attached to the1st Battalion of the Bedfordshire Regiment, regimental number 6974. He fought in the Western European Theatre of War, France and Flanders and was killed in action on 20th April 1915.

He was awarded the 1914/15 Star, the Victory Medal and the British War Medal.

Walter was the eldest son of Walter and Annie (nee Cole) Picking of Ashwell, Hertfordshire.  He was a pupil of the Merchant Taylors School in Ashwell and was a painter and decorator for FJ Bailey & Co, the Ashwell builders before enlisting.

In 1904 Walter married Florence Emily Allen and they had two children, Walter Samuel born on 2nd December 1905 and Frances Myrtle born on 2 August 1908.

Walter’s brother William also served in the War and survived.

Events from the Royston Crow April 1915

There was news of more casualties among Ashwell soldiers.  Private Walter Picking was killed by a sniper’s bullet and died at his post. The 33 year old reservist was the father of two children and had been a painter with FJ Bailey & Co, the Ashwell builders.

Events from the Royston Crow January 1915

In the school, Mrs Walter Picking, thinking it would interest the Boys sent in the Christmas present her son had sent home. It was one which he had received at the Front from the Princess Mary and the Boys took much delight in seeing it. It consisted of a box containing a pipe, a packet of cigarettes, tobacco, a Xmas card and a signed card with portrait of the King and Queen wishing him a safe return from the war. What would such a box of treats contain today?