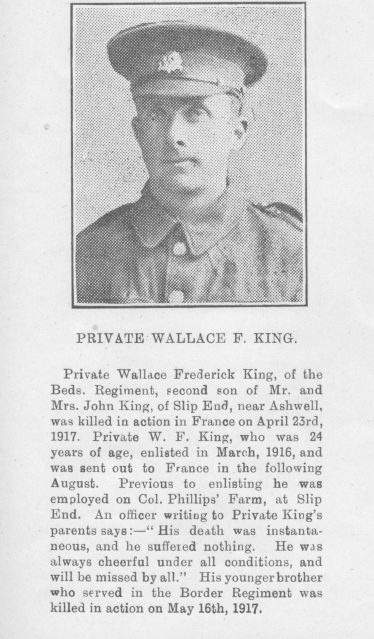 Wallace enlisted in March 1916 with the Bedfordshire Regiment.  He was a private, Regimental number 27811, and fought in the Western European Theatre of War, France and Flanders.  He was killed in action on 23rd March 1917.

Wallace was awarded the Victory Medal and the British War Medal.

He is commemorated on the the Arras Memorial at Foubourg-d’Amiens Cemetery, Amiens, France, the Odsey War Memorial, Cambridgeshire, and the Sandon War Memorial.

Wallace, born at Slip End, Hertfordshire, was the second son of John Edward and Sophia (nee Gray) King of Slip End.  Before enlisting he was a farm labourer on Col. Philip’s farm at Slip End.

Two weeks after Wallace was killed his brother Albert George died of wounds in France serving with the Borders Regiment.