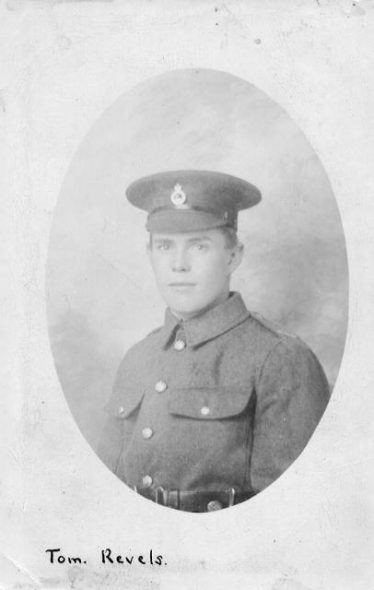 Thomas enlisted with the Hertfordshire Regiment on 11th November 1916, Regimental Number 5939.  He then transferred to the Princess Charlotte of Wales’s Royal Berkshire Regiment, Regimental Number 36437. Thomas saw active service in the Western European Theatre of War, France and Flanders and in 1917 the Regiment moved to Italy to strengthen the Italian Resistance.  It was here, on 40 September 1918, that Thomas received a shell wound to his right thigh and after convalescing was discharged from military service on 23rd February 1919. He survived the War and died at Ashwell on 24th February 1984.

Thomas was awarded the British War Medal, the Victory Medal and the Silver War Badge.

Thomas was the fifth son of William and Emma (nee Waldock) Revels born at Ashwell, Hertfordshire on 9th August 1895. He was a pupil at the Merchant Taylors School in Ashwell.  Before enlisting Thomas was a farm labourer.

Thomas and died at Ashwell on 24th February 1984 and is buried in the St Mary’s Church Cemetery, Ashwell, Hertfordshire.

Thomas’s brothers James and Percy also served in the War but died in action, his brother George served and survived.