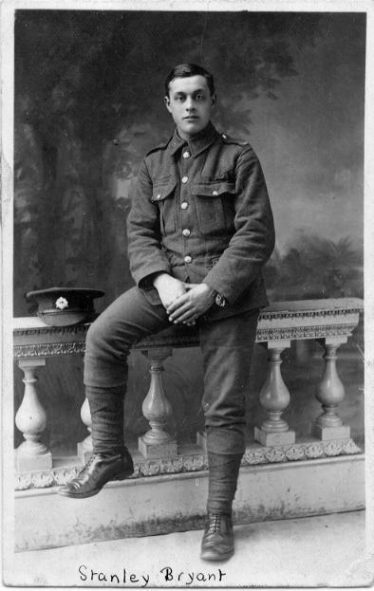 Stanley enlisted in August 1914 with the 1st Battalion Bedfordshire Regiment, Regimental Number 14609) and was mobilised to the Western Front where he engaged in the battles of Ypres. He then transferred to the 10th Battalion Nottinghamshire and Derbyshire Regiment (The Sherwood Foresters), Regimental Number 103460. The Royston Crow suggests he might have been a prisoner of war but he is not mentioned in the Prisoner of War lists.  It is not known if he survived the War.

Percy was awarded the 15 Star, the British War Medal and the Victory Medal.

Stanley was the 6th son of Benjamin and Esther (nee Huffer) Bryant, born in Ashwell in 1893. He was a pupil at the Merchant Taylors School in Ashwell, Hertfordshire.

Before enlisting Stanley was a gardener for a Metropolitan Police Magistrate (probably Edward Snow Fordham).

It is not known if Stanley married or had children.

Stanley’s brothers Arthur, Rupert, Sidney and Percy all survived the war and returned to Ashwell. Rupert received a shrapnel wound to his arm and was awarded a wound stripe.  George died in the Battle of the Somme on 13th November 1916.