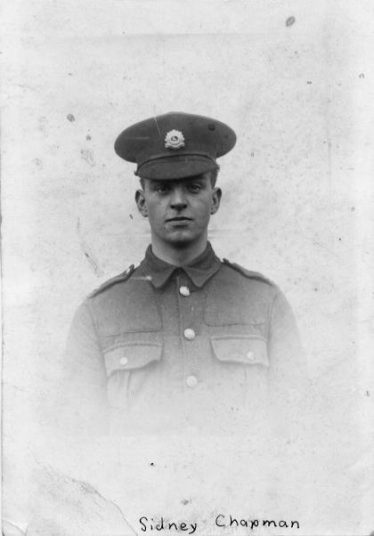 Sidney enlisted with the Bedfordshire Regiment, 1st Battalion, on 29th August 1914.  He served in the Western European Theatre of War, France and Flanders.  His battalion fought in the First Battle of Ypres and Sidney suffered a gunshot wound to his left leg in the Battle of Hill 60 on 21st March 1915.  He was discharged from service on 2nd June 1916.

Sidney was awarded the 14/15 Star, the British War Medal, the Victory Medal and the Silver Badge.

Sidney died at the Lister Hospital, Hertfordshire on 17 September 1949.

Sidney was the second son of George and Julia (nee Lee) Chapman, born in Ashwell on 4th September 1886. He was a pupil at the Merchant Taylors School in Ashwell, Hertfordshire. The 1911 census records Sidney as a farm labourer in Ashwell.

Sidney married Dorothy May Holt in the first quarter of 1919.  They had one son Sidney Dennis, born at Letchworth Garden City on 28th July 1920.

Sidney died at the Lister Hospital, Hertfordshire on 17 September 1949.

Sidney’s brother, Victor, served with the Royal Field Artillery in France and survived the War.