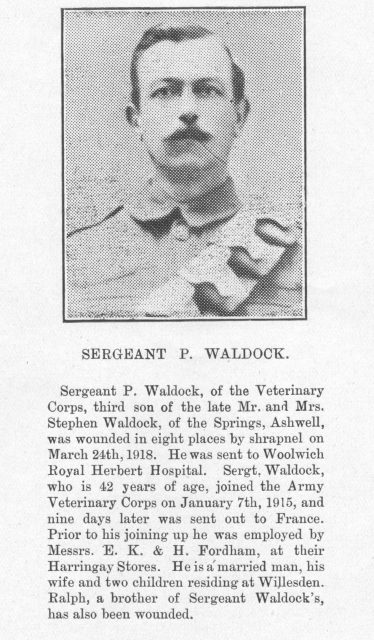 Peter volunteered on 7th January 1915 with the the Royal Army Veterinary Corps, Regimental Number SE/3121, and nine days later he was sent to the Western Front, France and Flanders, where he took an active part in many important battles including the Battle of Cambrai and the Retreat of 1918. On March 24th 1918 he was severely wounded in eight places by shrapnel and invalided home. After months in the Woolwich Royal Herbert Hospital he was discharged on 8th October as medically unfit for further service.  Peter survived the War and died in Willesden in the 3rd quarter 1923.

Peter was awarded the British War Medal, the Victory Medal and the Silver War Badge.

Peter was the third son of Stephen and Charlotte (nee Waldock) Waldock, born in the 3rd quarter 1876 at Ashwell, Hertfordshire.  He was a pupil at the Merchant Taylors School in Ashwell.  Prior to enlisting he was a drayman with EK & H Fordham at their Harringay Stores, London

Peter died in Willesden in the 3rd quarter 1923.