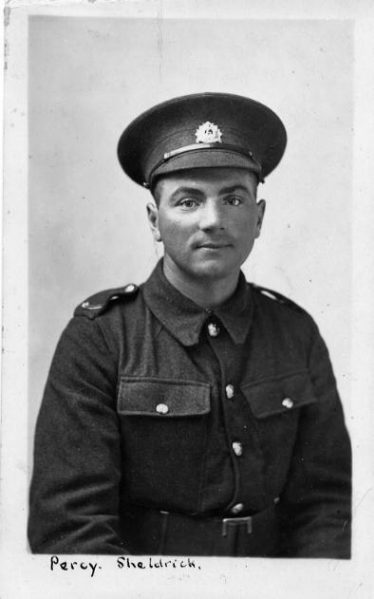 Percy enlisted in November 1915. He served with the 4th Bedfordshire Regiment, Regimental Number 509776, in the Western Europe, France and Flanders Theatre of War. His regiment engaged in the Battle of Ancre in 1916 and in 1917 during the Second Battle of Scarpe Percy was severely wounded in the head and arm.  He was sent to England to recuperate. He recovered but it is not known if he was sent back to the Front.

Percy survived the War and died in Ashwell on 24th October 1979.

Percy was the 4th son of John and Martha (nee Scoot) Sheldrick, born in Ashwell, Hertfordshire on 28th September 1890. He was a pupil at the Merchant Taylors School in Ashwell.  Before enlisting Percy was a drayman at one of Ashwell’s breweries.

At the age of 10 Percy was introduced to embroidery and had a distinguished career as an embroiderer and was visited at home by the Queen Mother in 1969.  Percy also held the position of clerk at the Hertfordshire Rubber Company from which he retired in 1950.

Percy married Ethel Holben on 23rd December 1922 at Wrestlingworth, Hertfordshire. They had three children, all born in Ashwell.