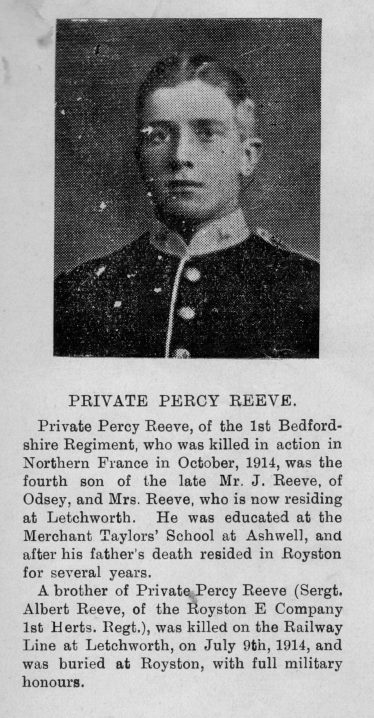 Percy enlisted at Bedford with the 1st Battalion of the Bedfordshire Regiment, Regimental Number 10160. He served at the Western European Theatre of War, France and Flanders and was killed in action on 26th October 1914.

Percy was awarded the 1914/15 Star, the Victory Medal and the British War Medal.

He is commemorated on the Richebourg-l’Avoue, Departement du Pas-de-Calais, Nord-Pas-de-Calais, France Memorial and on the Ashwell War Memorial. Although he was a pupil of the Merchant Taylors School in Ashwell he is not on their Roll of Honour.

Percy was born in Guilden Morden, Cambridgeshire, the fourth son of James and Sarah (nee Manning). He was educated at the Merchant Taylors School in Ashwell.  Before going to war he was in domestic service.

Percy’s brother, Horace served with the 1st Hertfordshire but returned home and died in an accident on the railway line at Letchworth on 9th July 1914.