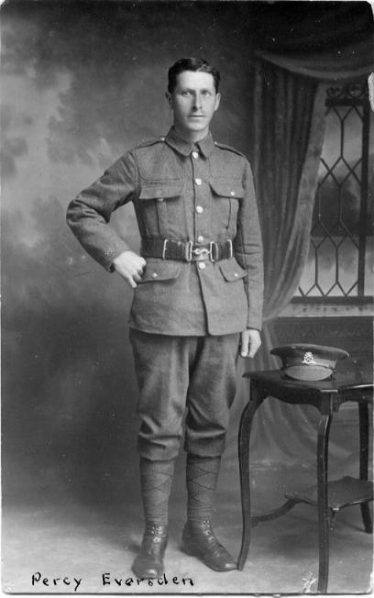 Percy enlisted with the 3/5th Battalion of the North Staffordshire Regiment on 16th June 1915 in Alfreton, Derbyshire. He saw active service in France as a gunner. On the 23rd August 1916 he transferred to the Machine Gun Corps, the Heavy Branch of which was the first to use tanks in combat and subsequently turned into the Tank Corps, later called the Royal Tank Regiment.  Percy was a mechanic and chauffer, and in November 1917 was appointed a 1st class tank mechanic. He was promoted to corporal in November 1918.

Percy survived the war and returned to his family in Derbyshire. He died on 7th October 1959.

Percy was born in Ashwell, Hertfordshire on 26th December 1884, the third son of Julius James and Emma (nee Harradine) Eversden. He was a pupil at the Merchant Taylors School in Ashwell.

Prior to joining the army Percy was a gardener at Carnfield Hall, Alfreton, living in The Cottage on the property.

Percy’s brothers Harry and (Harvey) Cecil survived the War but William and Julius were killed in action.