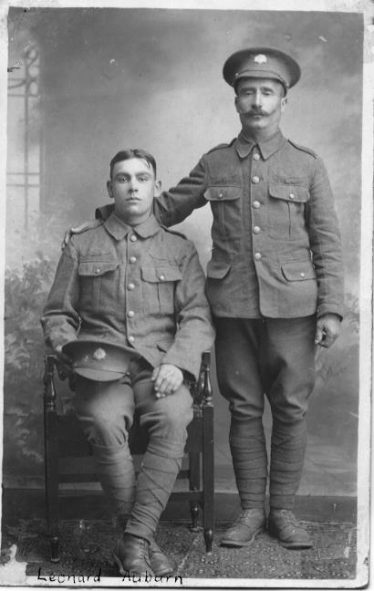 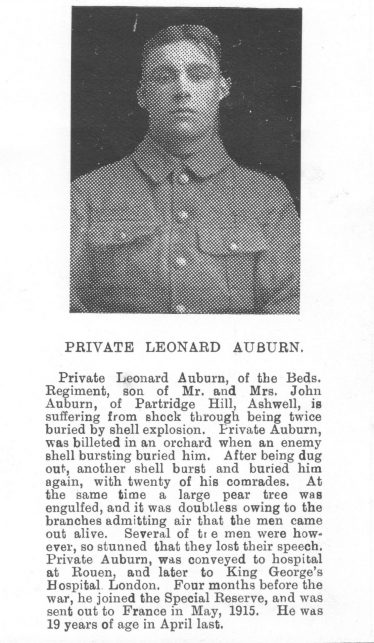 Leonard enlisted at Hertford on 18th February 1914.  He embarked for to the Western European Front, France, on 19th May 1915 with the 2nd Battalion of the Bedfordshire Regiment. In June 1916 he suffered shell shock and was returned to England for rest and recuperation.  On 12 March 1917 he was re-embarked to France. He suffered gas poisoning in June 1917 and was returned to England.  In September 1918 Leonard was posted to the Labour Corps, Agricultural Coy and in February 1919 was attached to the No.1 Disposal Unit at Crystal Palace. He survived the War.

Leonard was the eldest son of John and Annie (nee Haylock) ) Auburn. He was born at Stotfold, Bedfordshire in April 1897 and was a pupil at the Merchant Taylors School in Ashwell.  He was still at school in 1911 and there is no evidence of employment prior to enlisting.

There is no evidence of marriage or children as his Will leaves all his assets to his brother George.  Leonard died on 4th March 1960 in Willesden.

Leonard’s brother Frank also survived the war having served with the Manchester Regiment in the Western European Theatre of War, Italy and Egypt.