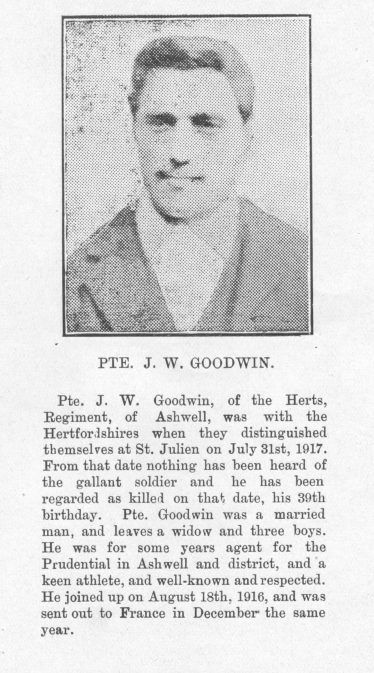 John enlisted at Hitchin on 18th August 1916 and was with the Hertfordshire Regiment, 1st Battalion when they distinguished themselves at St Julien, Ypres on 31 July 1917 (his 39th birthday).  Nothing has been heard of him since that date and it is assumed he was killed during that battle.

John was awarded the Victory Medal and the British War Medal.

He is commemorated at the Bedford House Cemetery, Zillebeke, Belgium and on the Ashwell War Memorial.

John (also known as William) was born in Arlesey, Bedfordshire to John and Martha Ann (nee Day) Goodwin in 1880.

He married Sarah Taylor in the first quarter of 1903 and they had three sons, Frederick, Francis and Stanley, who are shown on the 1911 census to be living in Cleve House, Ashwell, Hertfordshire.

Before enlisting John was a well-known and respected Prudential Assurance Agent in Ashwell & District.  He was also a keen athlete.