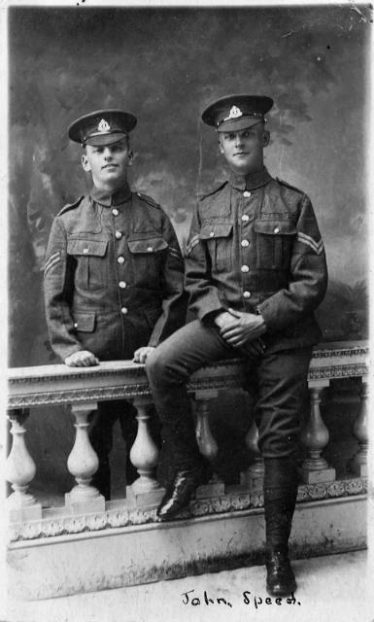 John enlisted with the Suffolk Regiment on 28th April 1913, Regimental Number 8700.  He rose to the rank of corporal.  In August 1914 John was sent to the Western Front, France and Flanders and on 4th August 1916 was wounded. He returned to England and on his recovery joined the 3rd (reserve) Battalion at Felixstowe where they held the garrison for the defence of Harwich.

John survived the War and died Letchworth, Hertfordshire in the 3rd quarter 1981.

John was awarded the 1914 Star with clasp and roses, the British War Medal, the Victory Medal and the Silver War Badge.

John was born at Hinxton, Cambridgeshire on 27th January 1895, the only son of Frederick and Mary Ann (nee Whitehead).  When John was about eight the family moved to Bygrave, Hertfordshire and it is likely that he was a pupil at the Merchant Taylors School in Ashwell, Hertfordshire.  Before enlisting John was a groom.

John married Lily Hemmings.  There are two listings of a marriage between John Speed and Lily Hemmings, the first in the 3rd quarter 1950 and the second in 2nd quarter 1967. They had one son, Marcus John born at Bygrave in 1940. The 1939 census shows John a Railway Engineer (lengthman) living in Bygrave with his wife.

John died at Letchworth, Hertfordshire in the 3rd quarter 1981.