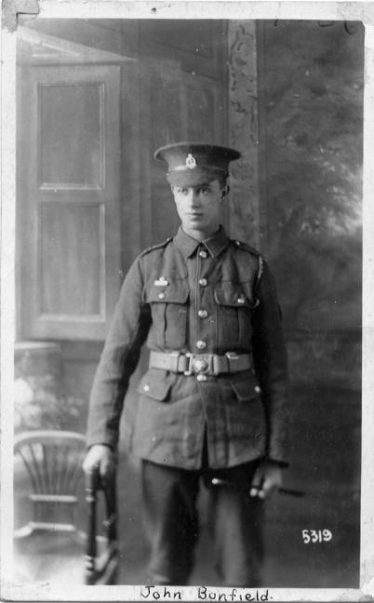 John enlisted on 22 April 1915.  He served with the Royal Army Medical Corps, 1/1st Home Counties Field Ambulance, Regimental Number 493619, and saw active service on the Western Front on the Somme and Ypres. John survived the War.

He died at Papworth Hospital on 13th January 1964.

John was born in Ashwell in 1898, fifth son of John George and Elizabeth Jane (nee Lester). John was pupil at the Merchant Taylors School in Ashwell.

John married Alice Cox in the 3rd quarter of 1927.  It is not known if they had any children.

John worked at the Royston Station as leading porter from 1920, as shown in the station employment records of 1939.

The 1851 census shows John’s grandfather, George, as publican at the Three Tuns pub and in Ashwell and farmer of 55 acres. The 1890 Post Office Directory shows that John’s father, John George, took over the running of the Three Tuns and by 1891 he was a job master (someone who rents out horses and carriages).

John’s brother Arthur emigrated to America in 1913. He served in the War with the American Expeditionary Force and survived the War, returning to America.