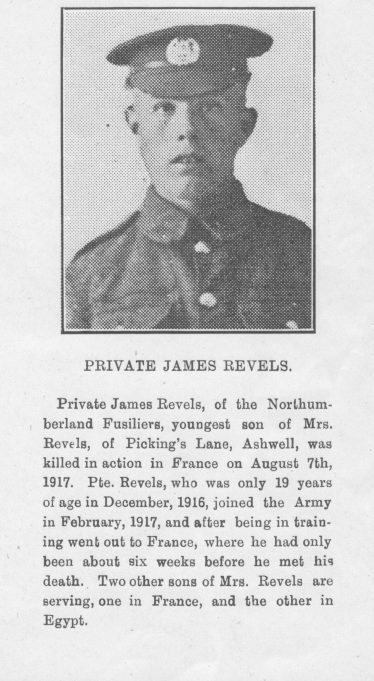 James enlisted on 29th February 1916 at Hitchin and firstly served with the Northamptonshire Regiments, 5th Battalion, Regimental number 22378.  He then transferred to the Northumberland Fusiliers, 16th Battalion, Regimental number 37057 and was sent to the Western European Theatre of War, France and Flanders.  He was killed in action on 7th August 1917.

James was awarded the Victory Medal and the British War Medal.

He is commemorated on the Nieuport Memorial, Nieupoort, Arrondissement Veurne, West Flanders, Belgium, the St Mary’s Church Ashwell Roll of Honour and the Ashwell War Memorial.

James was the sixth, and youngest, son of James and Emma (nee Waldock) Revels of Picking’s Lane, Ashwell.  He was a pupil at the Merchant Taylors School in Ashwell.