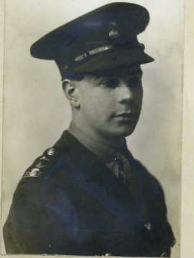 In August 1914 Hugh went to Sandhurst College as a cadet, a few days after the War broke out. In November 1914 he received a 2nd Lieutenant’s commission with the 2nd Battalion of the Northumberland Fusiliers, Regimental Number 2477, and on 18th January 1915 he was sent to the Western Front, France and Flanders to the trenches.  He was invalided out with severely frost-bitten feet but recovered and returned to the Front. In October 1915 Hugh was wounded by the explosion of a bomb whilst in service in the trenches but recovered in hospital at base camp.

Hugh then joined the Royal Flying Corps, as a Captain, and on 7th April 1916 took his flying certificate on a Maurice Farman Biplane, joined the Royal Air Force and was promoted to Pilot/Major. He joined the ‘C’ Flight of 14 Squadron which went to Egypt in an attempt help the Grand Sherif of Mecca stop the Turks gaining the Suez Canal.

Hugh survived the War and died at Eastbourne, East Sussex on 11 November 1986.

Hugh was awarded the 1914/15 Star, the British War Medal and the Victory Medal.

Hugh was born in Ashwell, Hertfordshire on 4th March 1894 the youngest son of Edward Snow and Annie (nee Carr-Jackson) Fordham. He was educated at Harrow and studied at Trinity College, Cambridge University.

It is not known if he married or had children.