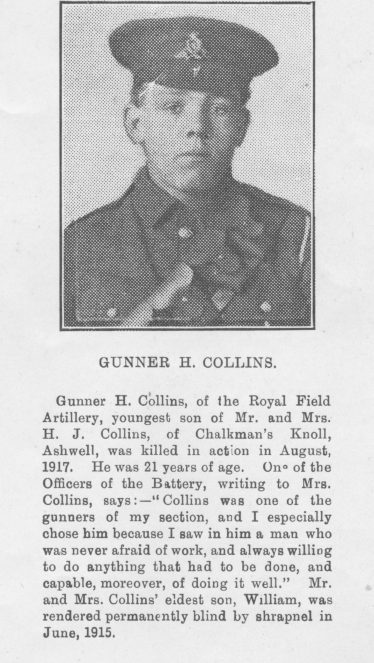 It is not known were or when Henry signed up but he embarked for Egypt on 29 December 1915. He was transferred to the Western Front, France and Flanders where he saw active service as a driver on the with C Company 71st Brigade of the Royal Field Artillery.  Henry was killed in action on 30th July 1917 at Ypres when shells fell amongst their guns.  He is buried in the Brandhoek New Military Cemetery at Vlamertinghe, Ypres, Belgium.

He was awarded the British War Medal, the Victory Medal and the 1914-15 Star.

Henry never lived in Ashwell but his parents did when Henry Snr became the licensee of Chalkmans’ Knoll in December 1916.  William Henry, Henry’s brother who had been blinded by shrapnel in 1915, was listed in the electoral rolls of 1920 at Chalkman’s Knoll.

Henry was killed in action on 30th July 1917 at Ypres and is buried in the Brandhoek New Military Cemetery at Vlamertinghe, Ypres, Belgium.