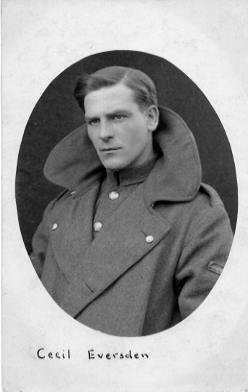 (Harvey) Cecil enlisted on 8th January 1916. He served as a gunner with the 100th Brigade Royal Field Artillery and was promoted to Lance Bombardier by the end of the War. He saw active service on the Western Front, France and Flanders.

Cecil survived the War and returned to Ashwell.  He died in Ashwell in 1968.

Cecil was awarded the British War Medal and the Victory Medal.

Cecil was the fifth son of Julius James Eversden and Emma (nee Harradine) Eversden, born in Ashwell in 1895.  He was a pupil of the Merchant Taylors School in Ashwell.

Before enlisting in the army he was a bottle washer at a brewery in Ashwell.

Cecil’s brothers Percy and Harry survived the War but William and Julius were killed in action.